Posted on September 3, 2014 by postpunkmonk

I had been a fan of the B-52s from the point of finally hearing/seeing them on Saturday Night live after being taunted by the splendor of their debut album cover for six months in the record store. I [finally] bought their debut and immediately bought their sophomore “Wild Planet” album the week of its release in 1981. By late 1981 I was beginning to wonder when their third album would be released, since in those innocent times, an album a year by your favorites was pretty much the standard. At least by that time, I had entered college and thus the wonder of Billboard magazine was part of my weekly schedule! The scuttlebutt in those august pages spoke of how the B-52s would have their new album produced by David Byrne of Talking Heads. Hmmm. I didn’t know what to think about that.

The B-52s were an ebullient party band and Byrne was a neurotic outsider, capable of brittle, unnerving tension that occasionally found release in Talking Heads music; the two bands were certainly worlds apart in vibe. It was not until early January of 1982 when the mooted “Mesopotamia” album finally dropped, and when it did, I could’t help but notice that the resulting disc was a six track EP, clocking in at a scant 26 minutes.

This disc quickly entered the Record Cell but didn’t stay long. It was gone within four years during the Great Vinyl Purge. To say that I didn’t care for it at the time was an understatement. I felt that David Byrne was exactly the type of person who should have been kept at arms length from this artistic, yet ultimately, fun loving party band. The dry, flat production did nothing for me back in the day. Having rid my collection of this mini album, I had not really thought about it too much in the intervening decades. Until this morning, that is. While at the gym, the title track aired on the P.A. and for the first time ever, it sounded good to me.

Maybe it was simply the fact that this sounded less electronic than all subsequent B-52s releases, that won it some retroactive favor with my ears. I’ve come to think that the moment when the band bought synthesizers was their waterloo. Some later material sounds okay, but their adoption of sound-alike synthesizers instead of the freakish and idiosyncratic instrumentation that brought them to my ears [Farfisas, Walkie-Talkie, 2-string guitar, etc.] seems, in retrospect, to have been a decision that reduced their entertainment value for me. So now that I was interested in this record again, I went to see about a CD. 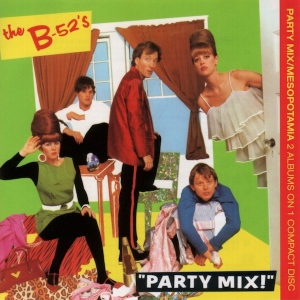 Following the mega-platinum success of 1989’s “Cosmic Thing” over a two year stretch, it didn’t take their new label Reprise Records long until they re-issued everything they could get their hands on. They released a remixed CD of the Fred Schneider solo album, repackaged very differently, and they also threw together this comp of the band’s two EPs for Warner Brothers in 1981 and 1982. The “Mesopotamia” EP was now on CD, but to buy it, you had to also get their awful 1981 filler EP of remixes from their first two albums. Considering that the band was known for wild dance music to begin with, the collection of remixed album cuts made after the fact [perhaps the first post-modern remixes?] by hands not at the initial recording of these tunes struck me as gratuitous and exploitative. I didn’t buy it in 1981 and I still don’t want it now. What is intriguing, is the credit for a remix of “Mesopotamia” by Tom Durack. I just found this out and am pondering this.

Next: “Mesopotamia” Gets Crazy…