A big chunk of what makes me the person that I am is that I eventually learned about the ins and outs of record collecting, though it was an arduous trek on my on in the wilderness with no other hands to guide me. When I discovered import singles, I became aware that [especially in the UK] there were lots of songs that got recorded by artists that I liked that never made their way onto the actual albums. The lure of non-LP B-sides eventually grew to eclipse my fervor for albums as the primary focus of my attention. After all, singles were ephemeral. They got released and then got harder to find over time, unlike their associated albums, which could remain in print indefinitely. It’s past time to give some attention to the songs that were released almost as an afterthought for connoisseurs of fandom to discover like the gifts that they were. 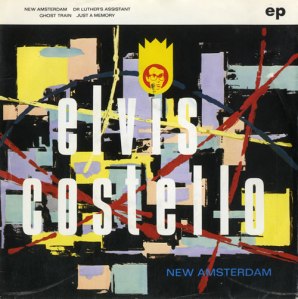 “New Amsterdam” was the third single to be released from Elvis Costello + The Attractions’ song-packed album “Get Happy!” in 1980. This single was available in two different configurations. A normal two track 7″ [which retained for 50 pence – the price was printed onto the sleeve] and a four track full EP. We won’t mention the four track picture disc all the better to influence the charts with. Savvy consumers should have bought the full EP version. Cheaper fans would have missed out on what is my personal favorite Elvis Costello song ever; the heart-wrenching ballad “Just A Memory.” The spartan track contains just Costello, his vocals double tracked to pad out the arrangement, and the sturdy Steve Nieve on piano [with a smattering of organ]. There are no rhythm instruments or guitar to intrude here.

The song was written for Dusty Springfield to sing, and with the addition of a third verse, she eventually did. I’ve never heard the Springfield cover of this song, but I can’t imagine it being any more potent a song in even her capable hands. The bittersweet, late night intimacy of the song’s delivery packs a wallop far more devastating than its 2:15 length would indicate on the face of it. One listen to this number and the thought “now this is songwriting” comes to mind. There is nothing to hide behind here. The melodramatic piano is downplayed from Nieve’s often busy hands with a severe economy that I don’t usually associate with his often ornate playing. It’s all about Costello here, and the one bet he hedged was in double tracking his vocals on the chorus.

I sometimes think that his decision to do that gave even this fine song a hint of compromise. The later recording of this on the Costello + Nieve boxed set as recorded live on their magnificent Lonely World Tour in 1996 strips it down to its essence, though Costello sang the longer Dusty Springfield arrangement of the tune instead of the brief, but  even more memorable 1980 EP version. This original version is a succinct emotional haiku in comparison. Its power is in inverse proportion to the amount of energy expended in its performance.

7 Responses to The Great B-Sides: Elvis Costello – Just A Memory