A Young Person’s Guide To Cabaret Voltaire [The Short Form] 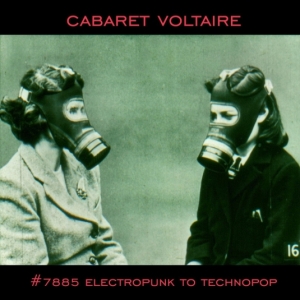 Two days ago I got an almost apologetic email from Cabaret Voltaire heralding their new compilation of tracks to be released on July 1st entitled “#7885 Electropunk To Technopop.” The mail went on to admit that “most, if not all of you, probably have all of these tracks already…” So true! And frankly, I appreciate the forthright honesty of Mute Records admitting that right up front. But that doesn’t mean that this collection is without merit! Certainly not.

For one thing, this is conceptually, the finest single disc distillation of the preferred phases one and two of Cabaret Voltaire’s career. On one hand, the Daleks-Go-Garage Punk splendor of the brilliant “Nag, Nag, Nag,” and on the other hand, the succinct dance floor doom of “Sensoria [7″].” Two great tastes that taste great together. The tragic house/techno phases of their career are simply avoided here. The first single from the Factory Sampler begins the selection that covers the Rough Trade phase of their career. The naive, Burroughsian electro cut-up of that era sounds almost ancient in that it was achieved with crude sonic collage and the earliest, cheap synths that had filtered down from Mount Olympus to the streets of Sheffield. The band had a conceptual drive in their attempt to confront the control process with their art that was honest, invigorating, and bracing.

When I first encountered them on “The Voice Of America” I was astounded to hear that there was a band finally confronting the major social issues of our time; namely, the manner in which political control was being exerted upon the citizens of the world by their governments with the complicit hand of the mass media. Are there any other topics worth writing about? As they made their way to the and of the Rough Trade years with “2×45,” the band had begun to approach the dance floor as their laboratory of choice for the formulation of their Molotov cocktails of sound.

The critical release that spurred the band through to their second, Some Bizzare phase that would prove absolutely perfect to my ears is actually missing from this release, possibly because there was never a 7″ remix of “Yashar” from “2×45” by remixer John Robie. So the second half of the disc begins with the next salvo in their dance floor pitch; the curdled, baleful sounds of the “Just Fascination” seven inch edit. The synth leads in this track never fail to induce goose bumps. Just thinking about them does the trick for me.

Has there ever been a more eternally relevant single than “Crackdown?” Sadly, it’s a tune that never goes out of style. I was delighted to see that this is not just a collection of CV singles; several album cuts have salted the playlist and never better than with the almost jovial track “Animation” from the “Crackdown” album. Yes, the perky technopop track is certainly hummable and quite the toe tapper, until you begin to notice the lyrics. Which seem to deal with torture and vivisection. I was always saddened that there was never a 12″ remix of this cut but its inclusion here is a vindication of the torch I carried for so long.

I have to admit that Richard Kirk has done a top job of condensing my favorite CV period into a succinct single disc designed to win new ears like no other possible gateway drug to the band. The disc has liner notes by Mr. Kirk and Mute head honcho Daniel Miller as well. The CD is priced to move and there is the possibility of a 2xLP as well [thoughtfully bundled with a CD in slipsleeve] for the moderate price of $22.95. Pre-orders from the Mute Bank will accrue a 10% discount for orders prior to this album’s July 1st street date. I may eventually pick this up just to get those previously unheard 7″ edits which are new to the digital space.