The Rezillos live can still sink their teeth deep into the neck of rock & roll! © Dyler Plummer

Of all of the bands I love and collect, I still can’t believe that I actually saw The Rezillos live in America in 2002! But the new material they teased us with at that show has been percolating for quite a while. I had some emails back and forth with Rezillos HQ [I would swear that Eugene Reynolds was on the other end of the computer] about new material, and I was told that singles were imminent, but while I was supposed to be on their mailing list, I never got the follow up. I see now that in the last three years there have been a further two single releases. I glommed onto “Number One Boy” as a DL only track when it was released, but in 2011 and 2013, there were two more singles released. What’s more, I’ve been picking up cosmic waves indicating that the long-gestating second Rezillos album [discounting the formerly posthumous live album “Mission Accomplished… But The Beat Goes On!”] is being readied for a release this summer.

This new track is backed by what is undoubtedly the old Pretty Things chestnut that I have only ever heard the 41 year old David Bowie cover of. Hopefully, this will change once I get my mitts on a copy of this single! The single had a release on the Rezillos own label on 7″ and CD5! With my collection, I’ll obviously need both! But the official Rezillos website won’t be of any help. Any stock there seems long gone. And the single copy for sale on Discogs.com is $135… ouch! Fortunately, itunes to the rescue with the less desirable, but affordable DL version with a third bonus track exclusive to the bundle… “Out of This World [glass mix]!” though I will still haunt the bins for physical copies, this will assuage my pain, and send some dinero in the band’s direction. A noble, pursuit, that. 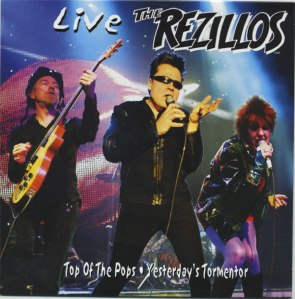 This 2103 singles dropped to the streets in four different formats: A three track DL and CD5, as well as red vinyl and clear 7″ goodness! At least I can get the CD from Edinburgh’s Avalanche Records for $10 with some of that presumably going to the band. The DL is easy pickings, but the colored vinyl is nowhere to be seen, currently. Damnit! So my work is cut out for me, with these two singles being blatant holes in my otherwise tight Rezillos collection.

What I really want now is data on is the new album, trumpeted as being ready “this Spring” on their website, but other nodes of the web point to a Summer release. It’s like a guarded state secret currently, but at least one live venue in their Rezillos concert posting blurbs cite the title as being “Caution-Distortion!” so at least we have a title. But that’s all that’s leaked from the Rezillo-cave deep in the Scottish highlands. If they ever get their mailing list sorted out [the computer keeps crashing] I will hopefully once more get the news straight from the band’s transmissions. Hopefully, they haven’t gone all Facebook on us, but one never can tell.