Voice of the Beehive were a group that I first heard of in 1988 when scanning a friend’s copy of some UK music paper. The name was all I needed to hear. It was a foregone conclusion that I would absolutely love any group who would name themselves that! They were formed when two sisters from California went to the UK and formed a band. Hey, it worked for Chrissie Hynde! They hooked up with a guitarist and bass player as well as Madness’ old drummer who had yet to have his group reform. I bought all of their import CD singles and when the album came out, that got a domestic release as well and I wasted no time in bringing it into my home.

The group had a great mix of UK postpunk meets SoCal vocal harmony pop (ala The Mamas & The Papas). Tracy Belland & Melissa Bryn came by their musical DNA courtesy of their father, Bruce Belland, who had been in crewcut heartthrobs The Four Preps. Their dad was a TV executive and another Prep was Glen Larson, a prolific and powerful TV producer who never saw an idea he couldn’t steal (The Fall Guy from Hooper, Battlestar Galactica from Star Wars, Alias Smith & Jones from Butch Cassidy & The Sundance Kid, Quincy from Wojeck, Automan from TRON, The Highwayman from The Road Warrior… the list goes on and on). So these ladies were very connected. Fortunately they had the talent to deliver the goods. The music was sweet yet powerful, touched by their great harmony singing throughout. That the lyrics were smart and biting made the package even more attractive.

Initially, I picked up CD singles, but with my plunge into mail order by the late 80s, I found that VOB had a ton of unique format vinyl releases, many with tchatchkes of all kinds in addition to vinyl-only tracks. So my VOB collection encompassed analog formats as well by the early 90s. This was unique among the many groups I collected at the time, but they had so many variations that didn’t set me back an arm and a leg, so why not? The group’s first release was a track [“What You Have Is Enough” 1st ver.] that showed up on a freebie 7” EP given away in 1987 with the UK music paper Sounds. That was a track they would later recut for their debut album. Here, it has more kick and spunk. Their proper debut was on the Food Records subsidiary of London Records for the single “Just A City” b/w “7 Shocks.” The 12” also contained their ace cover of Led Zep’s “D’yer Mak’Er” making it the one to get!

Their next single was the 1st release of the catchy “I Say Nothing.” There were two different 12” singles since that was the deal back then (blame FGTH). One had a poster and the B-sides “The Things You See When You Don’t Have Your Gun” [live @ ULU] and the Comsat Angels cover, “Independence Day.” The alternate 12” has a silkscreened silver on black paper cover and swapped out the Comsat Angels song for the otherwise unavailable “Any Day Of The Week” and another airing of the kickin’ “7 Shocks.”

The follow-up single was one of their absolute best! “I Walk The Earth” was written by Brad Nack and it just completely rocks! Great churning guitar riffs sit cheek-by-jowl with utterly gorgeous vocals that simply soar along with the uplifting lyrics. Apparently Nack was a staff songwriter at Warner-Chappel at the time as well as being Tracey’s boyfriend, so his demo came across the band’s plate. They were wise to commit it to vinyl! The single was their first on CD and had three B-sides: “No Green Blues,” “This Weak” and the Velvet Underground cover “Jesus.” The latter two showed up as unlisted bonus tracks on their US debut album CD.

The fourth single proved the hit [at least in the UK] and considerably raised their profiles. “Don’t Call Me Baby” had two non-LP B-sides on CD; “Jump this Way” and “Goodbye Tonight.” After this commercial watershed, London basically re-released all of the previous singles that were not hits in a [very] wide variety of formats and packages veritably crammed with tchatchkes. Including the best tchatchkes of all; previously unreleased tracks! The first up in the cash-in parade was “I Say Nothing.” It now offered a great cover of Blondie’s “In The Flesh,” that was just meant to happen!

Justifiably, the next re-release was the awesome “I Walk The Earth” with two brand new non-LP B-sides; “Everything I Had” and the supremely wonderful “Tattoo Song.” The latter is my favorite VOB B-side. The next single off of “Let It Bee” was the fifth single overall, the dreamy “Man In The Moon.” Having no doubt exhausted studio tracks for B-sides, this one sports a couple of live cuts, including “There’s A Barbarian In The Back Of My Car;” co-written with Zodiac Mindwarp! Disc one closes out with two tracks from a single by The Bomb Party which feature heavy Tracy & Melissa involvement. TBP were an early “grebo” band that probably had a Zodiac Mindwarp connection somewhere. The A-side was a cover of “Sugar Sugar” and the ladies gave serious backing vocals to “Do The Right Thing.”

Disc two has another side project starting it off. Tracy & Melissa guested on the 1st (and best by far) Johnny Cash tribute album from 1988, “Til’ Things Are Brighter.” They sing the early Cash tune “Five Feet High & Risin’” with the instrumental backing of The Mekons, who played on the entire album with guest vocalists singing. The whole package was great and this was one of the first, and best, tribute albums before that trend became an industry of its own. The band’s BBC sessions for Janice Long follow. Interestingly enough, they perform an all B-sides program.

The rarities from the band’s second album period are next in the program. The CD single was in a deluxe “honey pack” that was actually motor oil sandwiched between payers of clear PVC! Yikes! One hopes that all copies were immediately removed and put into a normal sleeve. I can only guess what the discs would have ended up like 18 years later if they were never removed from the packaging. The three B-sides are great, with top honors going to “Pocketsize!” 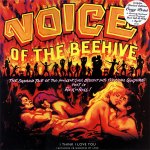 Their next single was originally slated for a concept compilation called “Guilty Pleasures” and the band had recorded a cover of the Partridge Family smash “I Think I Love You” with Don Was in 1989, before he became a star producer. Two years later, it ended up on their second album, “Honey Lingers” in a remixed form. The CD single has a heart shaped package and the original Don Was mix. Additionally, the CD has the Jesus Jones (remember them?) remix and the non-LP “Something About God.” The 12” vinyl had three additional tracks: the “Orgy Mix” of the A-side, VOB’s only 12” remix, and a pair of acoustic BBC sessions. Savvy consumers bought both formats.

The last UK single from “Honey Lingers” was “Perfect Place,” and it also had lots of multi-format goodness on offer. The 10” picture disc had a live “Trust Me” that was unique. It also had a non-LP B-side called “Shine Away.” The CD single had boxed packaging in addition to a slim jewel case and also had live takes of “I Say Nothing” and James’ smash “Sit Down.” These live cuts wrap up disc two of the collection. Unique to America was a single of “Adonis Blue” that came with the live “Sit Down” plus it had “Shine Away” in digital format, whereas in the UK it was only on a noisy picture disc – ouch!

The next step for VOB wouldn’t happen for another four years when their third album finally saw the light of day. “Angel Come Down” had a pair of non-LP B-sides that sounded more like the VOB of old than did the ballad on offer for the A-side. As you can see there was a dramatic image shift that occurred with their old thrift store chic giving way to a full blown Pre-Raphaelite look, minus the red hair. The original band had broken up by this time and T&M had started working with Pete Vitesse. The last VOB single with any rarities was the hard-to-find “Scary Kisses,” also from their third album, “Sex & Misery.” It featured “You And Your Dumb Club” and “Time On All Fours.” The rest of disc three consists of a self-published VOB CD that came out in 2003 called “Bee-Sides.” It featured known and unknown demos and two B-sides that had previously appeared, “Shine Away” and the slightly re-named “Pocket Sized.”

The VOB package is rounded out with an 110 page discography PDF [as seen left] outlining my large, if incomplete VOB collection in exacting detail. I was lucky enough to see the group once when they opened for That Petrol Emotion on their Chemicrazy tour. My friend Tom and I blew off the headliners to meet the sisters and hang out for a bit after their set with a few other fans, talking about the UK pop scene like the fans they were. One topic of discussion I recall was the then new debut single by Shakespear’s Sister, “Break My Heart.” They offered us a beer, but we declined as we don’t drink.