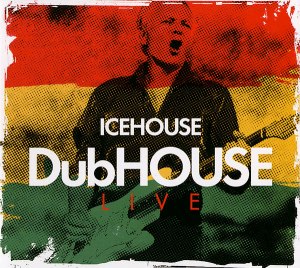 A month ago, I got one of the most wonderful comments on my post about Icehouse recording a CD of live dub reggae versions of their canon from Roger in Australia. In a nutshell, he offered to send me a copy of the desired CD that was nowhere on the web at that time. Sure, I could buy the album on iTunes [even in America] but I’m all about the physical CD, if there’s a choice. This was a much appreciated and generous offer that I was happy to take Roger up on, and yesterday, the CD arrived in my mailbox. By and large it’s a pretty amazing project!

Since reactivating the band in 2010, Iva Davies has been the only original member with drummer Paul Wheeler dating from the mid-80s “Man Of Colours” period. His guitarists/keyboardists were new recruits for the new millennium. The rest of the new players added for these gigs brought vocals/toasting/percussion and horns to the mix. Of particular distinction are the vocals of Tony Kopa, who carried lead on all of the reggae covers as well as adding toasting to the mix. Kopa also played percussion and the keyboardists doubled on melodica and accordion.

I particularly love the European touch given to the track “Icehouse” with a bassline right out of “Rikki Don’t Lose That Number” and lovely accordion getting extra help from Kopa on scratcher. It transforms this classic Icehouse number into a close cousin to Grace Jones’ “Libertango!” The new arrangement is utterly transformational and plants a big smile on my face. The toasting of Kopa on the middle eight was wicked cool but hearing the accordions drop in at the end on the transitional chords to the coda that were normally string synths was stunning.

The Lou Reed tribute was the only real dry patch here in that hearing Iva sing only the first two verses of “Walk On The Wild Side” before the track morphed into “Heartbreak Kid” left me wanting to hear more of the Reed song that what we got here. Otherwise, the segue between the ska arrangement of the Reed song and the Icehouse ballad was seamless.

I liked the predominant melodica on “Crazy” and the backing vocals were lushly arranged for that number, which gained a lot of soul in the more modest, less bombastic lover’s rock arrangement. Likewise, the melodica really took center stage on the version of “No Promises” which maintains the vibe of the original in spite of the drastically different arrangement.

Reggae was always lurking just below the surface of “Can’t Help Myself” so hearing that vibe coaxed out of the rhythm guitar and given its time in the sun here is one of those moments that makes such perfect sense that the notion of this album, should not be quite so surprising and left-field. Even so, the move to bluebeat doubletime in the songs’ coda still manages to raise an appreciative eyebrow.

The zero-g dub vibe of “Walls” bring the synths back into the mix via some undulating whale-song patches that build a vast amorphous space over the urgent percussion in the tune’s intro. The dubbed out horn section in the middle eight heralded the toasting of Kopa in a return to the mic spotlight. The last two cuts pick up the pace for a high energy ska bounce to end this unusual set of Icehouse shows. The 76 minute CD gives a lot of highlights, but not all of them. Fortunately, Icehouse has made a bonus track available on Soundcloud, which you may download below! The funky clavinet adds lots of punch to the reggaefied “Love In Motion” as heard here.

While I can’t say I was waiting to hear any favorite band of mine commit to an album of reggae versions of their canon, I have to admit that it sounds pretty natural to me in a way that reggae versions of, let’s say Simple Minds, Japan, or Ultravox would absolutely not. Even though I consider Icehouse Antipodean peers of those bands there is one factor on their behalf that gives this enterprise the whiff of legitimacy. The fact that Australia is a sun-drenched island nation, not unlike Jamaica, that is only a few hundred miles south of the equator makes this all seem fairly natural in ways that pasty Scots or Brits would absolutely not carry in their attempts. Cheers to Iva Davies for seeing this creative path that none of us knew was available.