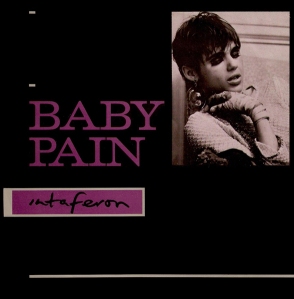 Sometimes, you just buy a record because of its cover. That was certainly the case in late 1984 when I happened across this release in Murmur Records. It was a used copy and the title, coupled with the iconic photo of Edie Segwick that prompted me to drop the three bones to bring this home. Actually, the cover was so great, I showed it to my friend Tom, and he bought a copy on the spot. I had no idea who Intaferon were, what their powers were, or even if they’d save the universe… or destroy it!

Fortunately, once I got the record home and gave it a spin I was rewarded with robust pop, heavy on the synths, with clockwork rhythms [reflecting the time-centric lyrics] and enough guitar to add sufficient noise to the mix to make it more than the sum of its parts. The melody was strong, making this a prime post-new wave breakup song par excellence.

In a rare move, the extended version was sequenced immediately after the 7″ mix on the A-side of the disc. It’s a bit unusual sequencing for a 12″ single, but the effect is spectacular as the last notes of the 7″ mix fades out, the 12″ mix hits with a fantastic vocal snippet and some rambunctious beatbox before the clockwork rhythm resolves itself from the noise amid the dub technique on display here. The net effect is almost like a single ten minute remix of the song that holds up really well for the length. In fact, the label misprints the time for the 12″ mix, listing it as 9:58 instead of the 6:15 it actually is. The whole single side it what adds up to 9:58, so that’s probably the origin of that snafu.

The B-side opens with what sounds like Vangelis-inspired cosmic synth doodling before the strong beat appears to lend some discipline to the proceedings. The 6:15 mix is mostly instrumental before vocalist Simon Fellowes appears near the end to sing a verse. Ironically, this mostly instrumental track was written by vocalist Fellowes, while the pure pop of the A-side is credited to instrumentalist [and fellow Simon] Simon Gilham.

I really enjoyed this single but I had no idea who Intaferon were. It was the next year, while watching Max Headroom, that I saw a clip of their debut single “Steamhammer Sam.” So that was the only other single by Intaferon that I was aware of for long years. Actually, I’ve never seen “Steamhammer Sam” in spite of looking out for it ever since that time. It wasn’t until the last ten years, when I looked around on the internet that I ever heard about their “Get Out Of London” single. That track, like “Stemahammer Sam” was produced by iconic producer Martin Rushent, unlike “Baby Pain, ” which had David Motion performing the honors.

It was at some time in 1985, that I saw the video for Intaferon vocalist Simon Fellowes’ crass cover of the great “I Want You Back.” The Hoodoo Guru’s song was a classic of its kind. I couldn’t say the same about the now renamed Simon F’s rendition. I never saw his solo album that was known alternatively as “Gun” in America and “Gun Control” [!] in the UK. The US LP apparently has “Baby Pain” in the tracklisting while the UK copy has “Hold The Bunker” instead. Neither “Steamhammer Sam” or “Get Out Of London” make an appearance. I have no idea if these tracks are as the Intaferon originals or re-recordings.

In 1987 I saw another Simon F album, this one actually on CD, so I bit in the hopes that it might offer a little of the Intaferon sauce. No such luck. “Never Never Land” was a tepid Billy Idol clone album of little merit. Dance rock tempos with tastefully distorted guitars and the soporific vocals of Mr. Fellowes did little to stimulate my palate, so I quickly unloaded the album and made sure to ignore the subsequently rebranded album by F Machine entitled “Here Comes The 21st Century.” Actually, my friend Tom bought that and was summarily non-plussed. I believe that it can be inferred that in spite of Simon Fellowes possessing the requisite rockstar cheekbones, it was Simon Gilham who was actually the unsung star of Intaferon. Internet scuttlebutt posits Gilham as a UK philosophy professor now. Several years back I became friends with his ex-wife, who has a storied rock and roll past of prodigious breadth. I forget how the subject came up [she may have been raiding my racks] but she was gobsmacked that I knew who her ex was and more to the point, considered myself a fan. I still need to get the other two Intaferon singles!