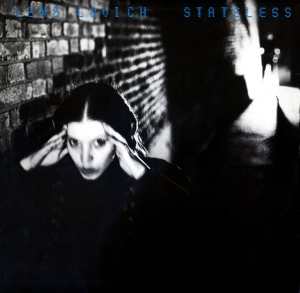 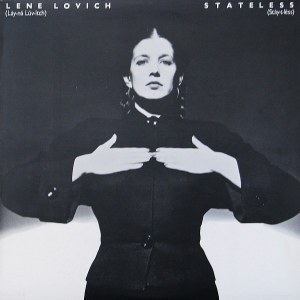 As you may remember last December, I was hoping that I could order a copy of the Lene Lovich 4xCD FLEX 002 boxed set of three albums and a rarities disc. I had missed the über limited 100 copy handmade set that sold out on hours back in October, but the set they were offering now, was produced in an edition of 500 and slightly cheaper, so I was happy to order it, now that my Moofgest ticket situation was all wrapped up. When I went to the Lene Lovich Web Store last week, cash in hand, to finally order my copy of FLEX002, to what to my wand’ring eyes should appear but an unannounced twofer of the first CD edition of the 1978 1st UK mix of “Stateless,” the astonishing debut album by Lene!

The LL website had promised a slightly cheaper [£7.50] single CD later this year, remastered from a clean vinyl copy [all masters were lost/unavailable] of SEEZ 7 [which resides in my Record Cell, not to worry]. So when I saw this unexpectedly, I bought on instinct, even though it would give me two CDs of the final mix by Roger Bechirian. Three if your count “The Stiff Years vol. 1.” The double edition of “Stateless” is another extremely limited edition exclusive from the Lene Lovich web store with both CDs in a special package that can have either cover as the primary art, and most importantly, an edition of only 100 copies.

I saw the blurb, twitched, and hit the “buy” button. For my £15, I’ll get a special edition, presumably long before the other copies are sold. When I scrolled down in the web store, I saw that later this year, that mooted single disc edition of “Stateless 1978” will eventually be issued as a single CD at the quoted cost. If you’d rather be more efficient when completing your Lene Lovich collection, I’ll understand. Me? I throw efficiency to the four winds where Lene Lovich is concerned! I’m just delighted that I have the wherewithal to tithe directly to the artiste to whom I own more than money can pay. Also that LL has saved me 20-30 hours of hard work in remastering from my copy, acquired several years ago which, of course, I have yet to play. The double edition is still in pre-order as of today. You know what to do.