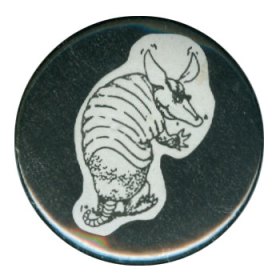 In previous outings of “The Great Record Stores,” I’ve focused on reasonably well-known citadels of vinyl-worship that may be known far and wide across the land. This time is different. This edition is going to get personal. This is about a small store that had three locations in Orlando, Florida starting over 30 years ago and hasn’t existed for at least 20 years, I’m guessing. I owe my knowledge of Crunchy Armadillo Records to my friend Tom, who spotted it first in its first incarnation on South Orange Blossom Trail, in a skanky little strip mall across the street from the “Golden Rock” 50s niteclub just south of the Holden intersection.

It was a stone’s throw away from the grimy comic book store we frequented at the time, which at least had a storefront adjacent to S.O.B.T. There was a gas station next to it and behind that gas station was a strip of dubious looking tiny businesses that had the feel of small, ethnic beauty parlors. I actually have no idea what businesses bookended Crunchy Armadillo, because once Tom took me through its hallowed halls, I was too busy browsing the bins. There was a good percentage of prime stuff here, and as it transpired, when I met the owner, I was already familiar with him!

Craig Michaels was an affable gent; soft spoken with a real passion for music. He was a former DJ at one of Orlando’s “FM Rock” stations; WORJ-FM. It was the better of two such outlets in Orlando, but those days were behind him when I first tumbled through the doorway, sometime in 1982, I’m guessing. It turned out that I also knew him from his writing for local music mags like “Rock’s Off” [which was sponsored by WORJ, if memory serves] as well as his pseudonymous writing for the competitive local rock mag mag “Dogfood,” that was the epicenter for my musical matriculation. “Dogfood” is another weeks worth of posts for another time.

Craig’s store may have been modest, but it was action packed, as Jonathan Richman would have it. The proportion of music I was interested in to the chaff was very high, and Craig had a lassiez-faire attitude that was a perfect match for a college student with little cash. It was possible to pull more merch than I had money for and leave some of it behind the counter for the next trip to Crunchy Armadillo! As if his modest prices weren’t incentive enough! Typical albums went from $3.00-4.00, with imports slightly higher. 12″ singles and EPs were $1.50-2.50. Almost no stock was new, but who cares? By that point, I was so beholden to used record stores for stretching my very modest funds, that the cheapskate in me didn’t mind.

So the prices and policies kept me coming back for more. It wasn’t long before dividing my mad money up into piles earmarked for comic books versus records, began to tilt heavily towards the music side of the entertainment equation. The stock I found in Armadillo included many records that to this day, I have not seen copies of elsewhere. Craig seemed to try his best to inject the store with the sort of import material that was like catnip to me. I would read about Gardening By Moonlight in an interview with John Foxx, and like magic, their album would turn up in the bins, used, for $4.00! For all I knew, I was buying his old records and discards, since I couldn’t imagine too many people making up such a pool of used stock locally!