Posted on December 3, 2013 by postpunkmonk 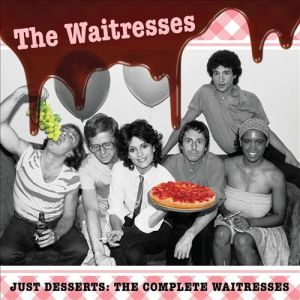 The Waitresses: Just Desserts – The Complete Waitresses US 2xCD [2013]

Disc 1: Wasn’t Tomorrow Wonderful?/I Could Rule The World If I Could Only Get The Parts

I was all over The Waitresses debut album, “Wasn’t Tomorrow Wonderful” like white on rice in 1981. I had read incessantly about their indie single “I Know What Boys Like” and was primed to buy if I could only find a copy in sleepy Orlando, Florida, where I lived at the time. Alas, it remained a kick that only New York City yielded up easily! But when Polydor signed the band and their debut album got released, I finally got my mitts on a copy and it never left my cassette deck. It was the a heavy portion of the soundtrack to my college freshman period.

In Patty Donohue, the group had one of the all time best deadpan woman singer I’d ever heard who spoke English as a native language. Chris Butler’s sardonic lyrics were a great fit with my New Wave, teenaged skull. I played that album heavily throughout the last quarter of 1981 almost to the point of burnout. Actually, I did get burned out on the band, so much so that I never bought another record, though I really loved their debut.

Deep within the recesses of my Record Cell, I currently have both of  The Waitresses LPs, awaiting the day of digitizing/remastering. Actually, they were not my personal copies. I only ever owned the first album and even that bit the dust in the Great Vinyl Purge of 1985. I assumed that a CD copy would be forthcoming eventually so I thought “no sweat.” <flash forward 14 years> I eventually obtained my friend Tom’s copies of both albums in the late 90s with a view of remastering them if nobody else did. That I’d never bought “Bruiseology” lent that disc a particular caché. But I never trained my attention on The Waitresses. <flash forward another 14 years> In 2010 there finally came a Japanese copy of “Wasn’t Tomorrow Wonderful” on kami CD… at great cost. No, it wasn’t likely that it would be making its way into my record cell any time soon.

I can’t remember where, but this summer, I heard that a 2xCD with everything by the band was in the offering… and promptly forgot about it. It wasn’t until I was buying groceries last weekend when I heard “Christmas Wrapping,” that I was reminded of this new CD. It’s funny, but I never heard “Christmas Wrapping” until sometime in the 90s, when in-store Muzak® systems played it. I knew about their “I Could Rule The World If I Only Had The Parts” EP but never bought a copy, back in the day. I just looked up “The Complete Waitresses” and see that Omnivore Recordings have done the deed with all of “Wasn’t Tomorrow Wonderful” plus the “Rule The World” EP on disc one. Attention to detail has the B-side to “Christmas Wrapping,” “Hangover 1/1/83” appended to disc one.

The second disc features “Bruiseology” which has been bolstered with a previously unreleased mix of the title cut in addition to the 12″ remix and dub mix of “Bread + Butter,” the non-LP B-side to “Make The Weather.” Does this make this collection truly “The Complete Waitresses?” Not quite, pally. Those with a Monk’s gaze will recognize that the original 7″ version of “Bread + Butter” as released on this disc and not remixed by John Luongo is m.i.a. In addition, the primordial Waitresses waxing is also missing.

This 7″ on Akron’s own Clone Records label dates back to the Tin Huey era for Chris Butler and was a thread he waited years to pick up on, but it was a good thing that he did. The Waitresses managed to get some airplay and sales under their belt, unlike the too-far-ahead-of-their-time Tin Huey. I never saw The Waitresses though I would have leaped at the chance ca. ’81-’82. Eventually, I have seen Mars Williams [sax] with The Psychedelic Furs and I just saw Billy Ficca [drums] last month playing in his earlier band, Television. I’ll need to get this disc and remaster it myself, but at least Omnivore Recordings has saved me a lot of work with their “Just Desserts” collection. Buy here if you’re so inclined.