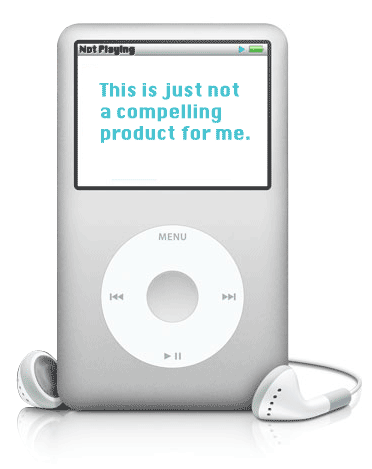 I remember when the iPod was released. I was a lifelong Macintosh user who loved music even more than computers. I was presumably the ultimate target audience for this device. A friend received one as a gift and deemed it “the best consumer product ever made.” I reviewed the press event that unveiled it, and then went on with my life.

Apple continued to release iPods every so often with updates to the iTunes software that made it all work. When I bought a new Macintosh operating system upgrade at one point, it came with iTunes, but I had no real use for it. I didn’t listen to music in computer file format. I didn’t download anything. I bought records and CDs. Lots of records and CDs.

That was part of the problem right there. I have between 2500 and 4500 CDs. I really don’t know how many, exactly. I have more CDs than rack space to store them, so a lot of my collection is “off rack.” I really don’t think they make an iPod with sufficient storage space to hold my entire collection. And I think that’s the appeal of the iPod to many; that it can contain one’s entire music collection in the palm of a hand.

Another problem is that I didn’t like MP3s or lossy file formats. I’ve heard the distortion that happens to certain frequencies after compression is applied to a music file. The pleasure of CDs [in theory] was that the result was as near as the master tape as it was possible for the consumer to get. Of course, the loudness wars of the last 10-15 years have resulted in CDs that can sound horrible and harsh because this lack of dynamic range is seen by enough people as a plus that it’s quite common to hear CDs now that you wouldn’t want to listen to.

The main elephant in the room that blocks my path to the iPod is the significant amount of time it would take to import my CD collection into an iTunes library! I have so little free time that I really can’t accept the countless hours it will take to repurpose my CD collection in order to listen to music on an iPod. When I want to listen to music right now I pull it off of the rack and play it in a CD player of some sort. And if the spirit moves me, as it often does, I can examine the liner notes in the booklet at the same time.

Then there’s the vinyl. I have 1000-1500 records. There’s only one easy way to get them into the iPod; digitizing each one as a file, then converting them to whatever format I’d want on my iPod. That’s a boundless amount of work right there, and I’m so fussy, that when I digitize my vinyl right now [for burning to CD], I spend an average of 10:1 for the length of the track carefully de-noising the clicks and pops manually.

The cost of the iPod is also prohibitive. $250 could buy me a lot of music on my want list. I’ve always been a “software guy” as opposed to a “hardware guy.” I’m more interested in having lots of music to listen to on a merely good sound system rather than spending a lot for an audiophile system. If I was given $5000 and told to spend it on sound equipment and music, I’d get a lot more enjoyment out of a $1000 system and $4000 worth of music to play on it rather than the obverse. I used to spend big money on video equipment back in the 80s. I got over that! I’ve not watched television in 17 years and wonder what took me so long to arrive at this epiphany. I should have spent those thousands of dollars on music instead!

Another strike against the iPod is that it is a portable music environment. I hate wearing headphones! I don’t like to be isolated from my surroundings. And I can’t imagine listening to music wherever I went in any case. It would seem to engender enforced solitude and I have enough solitude in my life to begin erecting more walls to keep people out! Yes, I know you can buy stereo docks; more money spent for the function of the CD boombox I already have!

Finally, there’s the whole “playlist” phenomenon. Making playlists is just more work! This iPod, on paper, represents enormous costs in time and money as I review the possibilities, and frankly, I can’t imagine any upsides yet to this lifestyle. I would be spending huge amounts of time to get my collection configured for the device, be spending extra time organizing and composing playlists, synching these playlists with my iPod. Constant maintenance. I might as well get another dog if I have that much free time!

So the way I see it, the perfect person for the iPod is someone who:

That person isn’t me. Can you make a case for me otherwise? If so, discuss.

9 Responses to REDUX: The iPod®: It’s Not For Me