I posted last week about the first phase of my Associates BSOG®. I’m about 6 weeks into that project, and so I don’t get bogged down, just to keep fresh, I’ve decided to do a quick & dirty album remaster just to get a sense of accomplishment under my belt. 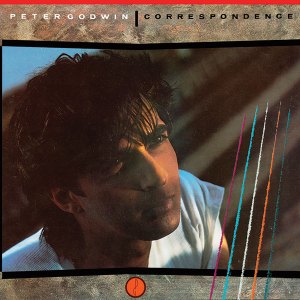 The album in question is “Correspondence,” by Peter Godwin. Last year I made a 2xCD of rare singles by Godwin and promised to get his two OOP albums, this one and the second Metro album, “New Love,” from analog to digital. “Correspondence” came first because I had four of the tracks on a Godwin best of compilation already in 16 bit form.

I first heard of Peter Godwin when an MTV news spot said that Ultravox singer Midge Ure was producing some work for him. In 1982 it still seemed like Ure could do no wrong. A bit later, the video for “Images Of Heaven” made it to MTV and was a stellar song. I looked and looked for the “Images Of Heaven” EP but never found a copy back in the day. Instead, I managed to pick up the UK 12” of “Torch Songs For The Heroine” in the late, lamented Record City import cutout bin and found a US Polydor 12” of “Emotional Disguise”, which had “Emotional Disguise/Emotional Disguise Inst.” on the A-side and “Images Of Heaven” on the B-side. But who is this Peter Godwin, and where did he come from? What are his powers? Will he save the universe… or destroy it?

For a start he was the lead singer for the group Metro. Their debut album came out in 1976 as part of the tail end of the Roxy-glam curve. It got picked up domestically in 1977 by Sire and got a release in the States. It is in print currently and contains the best known Metro song, “Criminal World.” You may have heard David Bowie’s cover of it on his “Let’s Dance” album; a fact that has kept Mr. Godwin’s cup full, if not runneth over, ever since.

The core of Metro was Godwin and Duncan Browne, but after the first album, Browne left for greener pastures. The rest of the band did a rethink and managed to enlist Stuart Copeland to play drums on a one-off “power pop” single under the name Public Zone. Since it didn’t set the world afire, Stuart decamped back to the still-green Police and Godwin with Sean Lyons, his guitarist, reformed a new Metro. The Public Zone single, when it surfaces (not often) usually commands $50 and up, due to the Police connection, so I can’t help you there.

The 2nd-gen Metro released their second album, “New Love” in 1979 as produced by Mike Thorne for EMI. That album awaits remastering within the REVO vaults as I type these words. A third Metro album, “Future Imperfect” was released the following year in Germany only. Martin Lawrence produced and the single “America In My Head” managed to get a UK release the next year as it turned a lot of heads during the UK’s “New Romantic” movement. A cursory glance at back issues of the seminal New Sounds/New Styles newro magazine of Kasper DeGraff and Malcolm Garrett revealed a lot of love for Metro at this time. And why not? The 3rd Metro album is a dazzling confection of post-punk pop driven not primarily by keyboards, but instead by just-released guitar synthesizers! 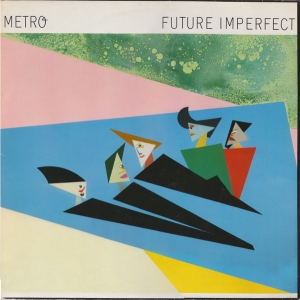 Had I been aware of it at the time, it would have been in heavy rotation in my personal playlist. Amazingly, this only got a release outside of the initial German-only LP in 1980 about five years ago when the minds at Oglio Records released it as Peter Godwin’s “America In My Head” album on CD! Sadly, this CD is now OOP and unavailable. It was mastered from vinyl, and maybe I could have done a better job from my LP copy, but it did save me at least 8-20+ hours of work!

From 1981-1983, Godwin released a brace of glittering singles that combined passion, drama and technology in a delightful cocktail of state-of-the-art New Romantic verve. Many of these were issued in various territories as the “Images Of Heaven” EP. 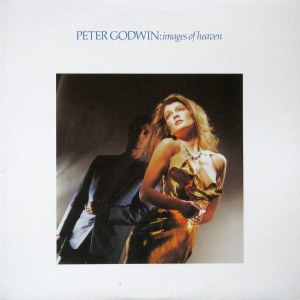 In 1983, his virtual swansong would play out when the “Correspondence” album hit the shelves. It represented nine new songs with none of his last two years of singles included in the program. The leadoff single was “The Art Of Love” which appeared in three remixes: US, UK and US dubmix. The final single was the tremendous “Baby’s In The Mountains” which had an excellent extended remix (Godwin’s best – by John Luongo) on the various single variations offered. And that was that until the “Images Of Heaven” CD came out on Oglio Records in 1998. It’s now OOP, unfortunately.

The 1st Metro album goes in and out of print, particularly in Japan, but seems to be widely available as a download at either Amazon or iTunes. No such luck for the rest of his catalogue. Peter Godwin is an above average talent capable of rising to the heights of greatness on some of his cuts while never quite skirting mediocrity on his others. He is a prime example of a Roxy Music-influenced stylist that more often than not, came up with the pop goods; not unlike Iva Davies and his group Icehouse. True, Peter doesn’t rock out like Iva, but I just wish he had recorded more music over the years.

But wait…! Just this summer Mr. Godwin has surfaced with his latest album under the name Nuevo! His fifth album of new material in a stately 34 year career arc. His new writing partner is the talented Johnson Somerset, whom I recognize from Bryan Ferry and Simple Minds cuts he’s worked on. Writing with the like-minded Godwin should be a natural! Their new album is available for download from their website and I would love to hear that as soon as the budget prevails. Mental note to self…

NOTE: Three plus years later and I still haven’t bought the Nuevo download!