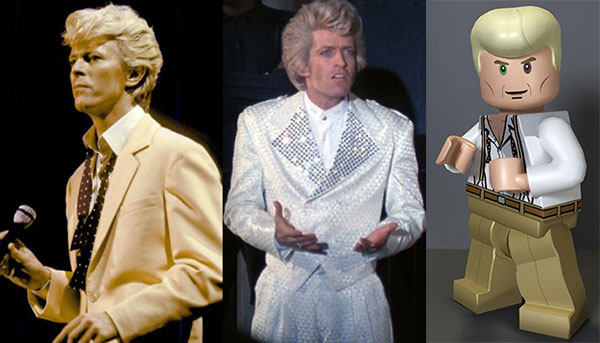 What was it about the mid-80s that made it the harbinger of artistic disaster for so many artists that I had previously thought the world of? By 1985, there seemed to be a perfect storm of political and social currents conspiring to hammer all of the square pegs that didn’t quite fit into round holes come hell or high water. Of course, those square pegs were beloved by me for exactly the reason that they did not fit into the prevailing molds that were never of interest to me from the very beginning. Nevertheless, even artists as great as meta-influence David Bowie succumbed to this wave, though tellingly, he managed to stumble first, in 1983. As usual, Bowie was always ahead of the pack.

Until March of 1983, David Bowie could do no wrong. Sure, he released the odd track like “Under Pressure” that was far from being prime Bowie, but that seemed like a lark done on the spur of the moment. By 1981 following the masterful “Scary Monsters” album, Bowie had become a genre unto himself as scads of New Romantics all pounced on various fragments of his past artistic personae and elaborated on them to power dozens of careers. Aping Bowie was good business for nearly a decade, but in particular, his “Berlin Trilogy” served as artistic grist for much of the best that Post-Punk had to offer. So it was until that fateful night in March when MTV premiered his new video, “Let’s Dance.”

If you are old enough, you may remember that MTV was one of the first cable channels to simulcast in stereo. If you split your cable input and ran the lead into the antenna terminals on your stereo, you could tune the FM dial until you were receiving MTV in  [poor quality, on  my cable system] stereo. In preparation for “Let’s Dance,” I made sure that a cassette was recording in my deck so I could listen to the song until the actual record was in stores to buy. At the fateful hour, amid the pomp and circumstance of a World Premiere Video®, the clip ran as did my VCR and cassette tape, only the next day I really didn’t want to hear it again.

What greeted my ears was inconceivably mainstream pablum of a low order indeed. The record sounded stupid, something that I couldn’t have said about any Bowie releases I’d heard before, not even “The Laughing Gnome.” At least that record had a sense playful sense of fun that buoyed it happily along as it overdosed on gnome puns that even managed to reference Mick Jagger’s education! This single, in comparison, sounded not only lobotomized, but actually evil. It proffered fascist disco; as if Leni Riefenstahl had made a 12″ single instead of a film. The heraldic horn figure that acts as the tune’s hook was relentless and charmless. The arrangement sounded like tanks crushing bones underneath as their inexorable lurch forward could not be stopped.

The next day at college my friends all discussed our disappointment and wondered how Bowie could have made this record. The wait since “Scary Monsters” had been three long years; an eternity in pop [at the time]. Bowie clones had come and gone during that time and he remained the eminence gris behind several pop trends and movements that had moved forward in his absence. This record was not the challenging art rock that we had expected by then. Not by a long shot.

What we could not have known at the time was that there had been very practical reasons for Bowie’s three years of inactivity as well as his naked grab for cash with “Let’s Dance.” His exploitative contract with Mainman Management had been overturned and his sitting out the years of ’81-’82 were for practical reasons. He was free to earn much more than he ever had before on any new recordings released after his agreement with Mainman had ended on the terms specified. Bowie had been bled dry by Tony Defries and by 1983, was free to earn some real money.

So Bowie felt the need to really make some cash. He blew off Tony Visconti for Nile Rodgers; causing a nearly 20 year rift between himself and his longtime producer. Nile Rodgers, for his part, was expecting to make an intriguing, artistic David Bowie album, only to discover that he was being hired to facilitate hits. So hits were delivered. As lead guitarist, Bowie hired Stevie Ray Vaughan, who was on the cusp of stardom himself by that time, but the Texas blues rocker was a poor fit with the remorseless “dance” music being crafted in The Power Station studios. As much as Vaughan’s own music is a good time, that can’t be said of the resulting Bowie sessions.

When the second and third singles were peeled off of the “Let’s Dance” album like hundred dollar bills off a pimp’s roll of filthy lucre, they only served to elaborate the story that we’d lost David Bowie. Thus began a five year [?] period of attempting to ignore the painful releases by an artist who once could command our attention effortlessly. That time felt like a scar upon me. It was an inconceivable notion that had become a horrifying reality. Not so much a reality as a living nightmare. The fact is, that I never even heard the full “Let’s Dance” album until 1999; over sixteen years following its release.

The worst thing about the “Let’s Dance” album, is that the singles were by far the best that it had to offer! The rest of the material was either completely unmemorable filler [“Without You,” “Ricochet,” “Shake It”] or vastly inferior covers of tunes done better the first time [Bowie’s own “Cat People” and Metro’s “Criminal World”]. And yet, it sold over ten million copies. It fattened Bowie’s coffers, and in the only good karma the record engendered, kept “Criminal World” writer Peter Godwin in clover that was richly deserved, but at what cost?

The karmic blade twisted exceedingly sharp at the compromised artist himself, resulting in his EMI years being a long dry period. All of his other albums for EMI, for which he was handsomely advanced a huge sum of money, sold middling to poorly. Bowie himself felt trapped with an audience that he could not fathom, much to his dismay. After those three albums, Bowie can be said to have never truly recovered from the price they extracted from his artistic soul.

While I have enjoyed albums he has made after 1988, there is the pall of his “Let’s Dance” years, hanging over them like some Ghost Of Bowie Past, hobbling his feet and extracting their vengeance from whatever artistic strides he has genuinely attempted to make. For all of the good to great work he’s done in the years since, the seismic effect of the EMI years has cast a huge shadow over his later years. Somehow, the notion that if he just hadn’t made “Let’s Dance” he might have weathered the thirty years that followed the 1970s in much better artistic health is an unshakable suspicion.