So the new OMD album is in hand after the band spent two years writing this new album [apart from Kissing The Machine”]. That makes for a very coherent album, as compared to the last one. The only moments that stand a bit outside of the thematic concerns are the recycled “Kissing The Machine” and “Stay With Me,” which harkens back to the group’s mid-80s MOR efforts to crack the US market. What are the thematic concerns? This is not the life that I expected, basically. McCluskey has crafted lyrics that dwell in bitterness at how society at the macro level, and people, at the interpersonal level, have let him down. After the pronouncement that “the future you have anticipated has been cancelled” opens the album, the rest of the songs examine how this has played out on various levels. Not surprisingly, he has mentioned a divorce in recent interviews, so this may weigh heavily upon his state of mind in creating this album. It sure seems that way to me.

By now I’ve listened to the album a couple of dozen times and its strengths and weaknesses exist cheek by jowl in a peculiar way. HOM had ten great OMD songs in a program of thirteen. The three I came to dislike [some immediately] were all among OMD’s worst efforts in their own way. EE has 11 great OMD songs and one borderline failure [“Stay With Me”] in a very cohesive album as compared to the eclecticism on the previous one. The thematic concerns of the material serve to cohere the songs but so does the production, which is heavy on streamlined melodies and what sounds like a few patches used predominantly throughout. On the DVD Paul reveals that he wanted to strip down the arrangements to make them simpler and more immediate.

The soft synths and streamlined melodies seem a little too facile to these ears. When listening to the group’s early albums last weekend, I was struck by how warm and organic they sounded. The band had to overcome the technical limitations inherent in late 70s technology to achieve their goals, and I maintain that the creative technical roadblocks made for a more inventive and exciting sonic palette. The music also sounded massive and leviathan in contrast to the “plastic” sound of EE. Let us not forget that it was a real “electric” moment when OMD singlehandedly rehabilitated the Mellotron from its proggy origins and brought it kicking and screaming into the post-punk era on 1981’s “Architecture + Morality.” There’s little of such inventiveness here. These could be presets from their DAW.

To these ears, nothing sounds better than analog synthesizers, as John Foxx + The Maths have dramatically proven of late. JF+TM are opening for OMD’s UK tour even as I type, so I’m hoping that OMD fan Benge of The Maths [OMD were the first band he ever saw live] will have a few words with OMD on the subject of producing their next album, so they can really hit the stratosphere [should there be one]. The material here is mostly strong, but the execution could be better. I’d also like to hear more real instruments among the synths. That gives them a contrasting context in which to pop that seems to be lacking here. The brief moments of bass and real drums are so cathartic when they appear, that I can’t help but miss them for the bulk of the album.

Another weakness that I can hear on this album is that there is a preponderance of the dreaded mid tempo ballads. In their defense, they are at least all pretty exceptional mid-tempo ballads! [barring “Stay With Me”] I usually hate the things, and McCluskey leaned so very heavily on them during his missable “solo OMD” phase in the early 90s that the first two such albums passed me by completely. All of these songs feature reasonable hooks and strong melodies for their uniformity of tempo. But the only song that bucks the trend here is the zippy “Dresden,” and that comes near the finish line.

Besides a homogeneity of tempo, what else bugs me about this album? Well, in what is perhaps the ultimate reason why I probably won’t be spinning this disc as much as “History Of Modern,” in spite of it lacking “If You Want It,” “Sometimes,” and especially “Pulse,” is that it sounds brickwalled, giving the thing a garbled character that has me straining to hear the music through what sounds like distortion. Uncool. very uncool. It is frustrating and ultimately fatiguing to listen to this music as mastered digitally.

All in all… another brick in the wall.

“Night Café” is one of the worst sounding tracks here. A look at the wave form reveals a tightly compressed sound. Zooming in until the wave is at 100% reveals why the sonics resemble rice krispies as shown below. 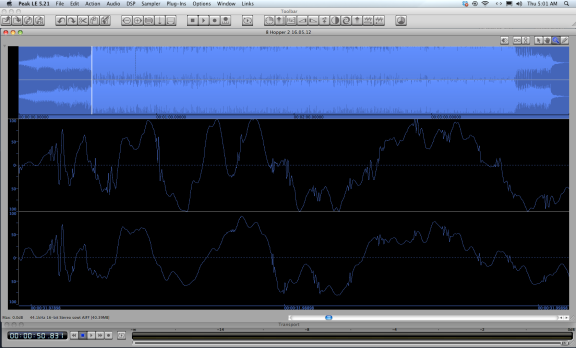 Zoom in on the wave form. The peaks of the wave hit the 100% saturation level five times within this 0.2 second segment of audio. And come darned close a sixth time. That introduces an awful lot of digital clipping distortion – at an average of 25 CPS, which manifests within the music as noise. Hideous, ragged distortion that is completely at odds with the clean sonics of the patches the band has used. The music sounds as if it had been recorded to flexidisc to these ears! I am literally straining to hear what should be clean sonics amid all of this harsh noise! You kids who have never heard a flexi, you aren’t missing much. The dynamic range of a flexi is nothing to write home about but to this day, there’s no better way to physically embed a song onto a cereal box. No wait, they probably use QR download codes to do that now, right?

Surprisingly, the demo CD sounds much better! It may come down to the original recording, I can’t say, but compare the file below of “Hopper,” the demo of “Night Café” and the wave only clips half as much, with less compression overall.

Notice how the wave doesn’t pingpong as wildly between 0% and 100% either. This makes for a demo version that is much more pleasurable to listen to. The music has breathing room and doesn’t have to shout to get our attention.

As a final comparison, notice how much digital mastering has changed from the dawn of the CD to 29 years later. The wave at right below is “Night Café” from “English Electric” with the original digital mastering of the OMD song “Telegraph” shown at right. We were young and innocent then, eh?

These factors limit my enjoyment of the album to its fullest. That I can still say it’s a good OMD album nonetheless, means they have also done some things right. The coherence of the album and the sequencing makes for a fast 43 minutes. I have these songs in my consciousness like companions already, so the writing can be said to have hit the marks. Most of the songs work for me, and two tracks here [“Our System” and “Final Song”] are among the best the band have ever recorded. “Metroland” is the shortest 7:30 song I have ever heard.

The new mix of “Kissing The Machine” seems out of place with the lyrical thematic concerns that drive the album, but it sounds much less jarring in this album’s context as a piece of music. The melody and arrangement slots in here immaculately, as compared to its original context. But the best songs here are the ones that pull away from the overall homogeneity that pervades this release. Only “Our System” sounds like the product of the band that recorded “Organisation” or amazing B-sides like “Annex” or “Navigation.” The bulk of this material is OMD material, yes, but just not highly adventurous OMD material.

The new album doesn’t stray too far from the tried and true OMD path. There are choral patches galore among strong technopop melodies. It can be argued that in the mid 80s the band did stray from this path in an attempt to court the American charts. And the results were disappointing, so in closing, I’d prefer to see artistic growth that I’m not sure could happen at this stage in their lives. I like the album because it hits those targets that worked for me 33 years ago. It hits them pretty square on target. The lack of songs that go against the OMD artistic point of view is also a plus. Is it staking out new territory? No. The band need to step out of their comfort zone for that to happen. That’s why I am fantasizing about Benge producing them. A safe, solid OMD album where they run through the tropes and traditional OMD artistic POV will result in albums like “English Electric.”

Is the album better than anything they released between 1985 and 1996? Yes. Seen in that light, it’s another triumph as was “History Of Modern.” But at the end of the day, I found HOM to be compulsive listening. Maybe because it hit so many heights after a 14 year layoff, I was primed and ready to soak up its many successes. That those successes were more diverse than found here, also plays to one of my particular preferences. Simple Minds’ last album was also a solid, coherent album that hung together like a fiend, but at the end of the day, give me the coloring outside of the outline inherent in an album like “Cry,” even though that album has one of the worst songs Simple Minds ever recorded on it. [“Face In The Sun” since you asked.]

That they have jettisoned the editorial weaknesses that hobbled HOM this time around is great, but the blandness of the arrangements and ultimately the quality of the mastering conspire to make me want to listen to this one much less than the last one. This is not a clear, progressive artistic trajectory, and as such, it vexes me. I think this band still are contenders. Thirty years ago, given the choice to buy an Ultravox or an OMD record, I’d have grabbed the Ultravox one first. But the last year has seen Ultravox rejoin OMD in renewed activity to a disastrous recording. OMD have delivered far more in their third phase than Ultravox can dream of! So I’m holding them to a high standard.

The high points that they’e scaled since 2010 are considerable, and it hurts to hear the band hedging their bets, as if they’re still smarting from the commercial smackdown that their ambitious and challenging “Dazzle Ships” album blindsided them with three decades ago. The band need to do something, if they can, to remove them from their zone of fear, that restricts the heights that they can scale as effectively as leg irons. I would suggest that they work with an outside producer the next time they’re in a studio. Start and end the list of prospective producers with Benge. That was easy. Playing physical instruments would be another huge step forward in resulting in more engaging work. A DAW is fine for editing, but creating in it results in “laptop rock” and the soft synths and loops are nearly dead on arrival. This band have created tremendous music and there’s the chance that they can still create at or near that level, if they can surmount the fear holding them back even now.