Yesterday we took a hard look at the accumulated China Crisis collection. But music doesn’t exist in a vacuum the size of my Record Cell. There was also a fan-run China Crisis website called Docklands that was helpful in that time period. I scoped over their discography to make sure that I had what I needed. Now it was time to build the project spreadsheet that would define where I went with this project, and how I was to achieve it.

The first spreadsheet is reproduced below with notes detailing where the song came from originally, whether it was analog or digital, and ultimately, where I was going to source my master from. I am a lazy Monk, and I will usually defer to a digital master in 99% of all cases*.

* Except where the label has brickwalled a digital master… 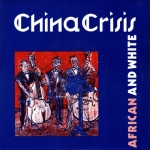 I had managed to mail-order the first, indie single that China Crisis had released. The Liverpool label Inevitable issued “African + White” b/w “Be Suspicious” in 1981 and it was the release that brought the group to Virgin’s attention. I imagined that the single was re-recorded or remixed when Virgin re-issued it. I did have the Virgin/Inevitable 12″ of the re-issue, and knew that the A-side of the 7″ differed from that of the 12″ version.

The B-sides of the first and second issues of the single also differed. The Inevitable 7″ had “Be Suspicious” as the B-side and the Virgin/Inevitable 7″ had “Red Sails.” But “Red Sails” was a track on the China Crisis debut album, and not a track that was needed on this project. These BSOG’s are meant to round up only material that was not issued on the group’s straight albums. So live tracks, remixes, non-LP B-sides were in the cross-hairs for this project. It was not meant to replicate the band’s singles inclusively.

Believe it or not there was a single commercial CD project, similar in scope to what I do in the non-commercial, personal world, that took all of the group JAPAN’s singles issued from the band’s Hansa masters. The staff of BMG/Japan who compiled “The Singles,” [see right] took each A/B side issued from the groups recordings for the Hansa label and slapped them onto a disc in the order that they were released in, such that several songs were repeated exactly in the 2xCD’s running order because the label released some recordings/songs more than once! That is an anal-rententive level of curation that even passes The Monk by! Sure, sure. I’m detail-oriented, but not that obsessive!

Next: …the remastering begins