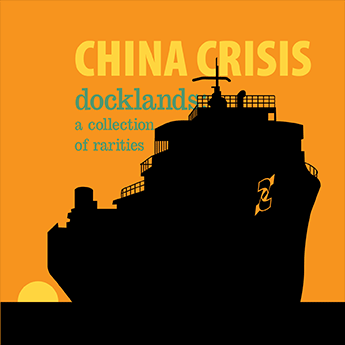 China Crisis were only cool for about 15 minutes in 1982 but nevertheless, I love their output. Particularly the early years, when they weren’t trying to be Steely Dan! But I’m getting ahead of myself! They were a Liverpool band that started working in the genre of Liverpudlian-yet-Enoesque synthpop. Not unlike what Daleki or primordial OMD were doing. They were much more introverted than even OMD and less arty than Daleki, giving them a distinction that would carry them through the fertile first phase of their career. The first album period favors ambient, Eno-inspired soundscapes to accompany the songs of abstract, quiet introspection. Melody is more important than rhythm to the band; almost a guarantee to relegate them to second-tier status in the UK pop environment of the time, though they charted many top 20 hits.

Their first single, “African & White” on the local Inevitable label attracted Virgin’s attention and it was reissued on Virgin with a new mix and artwork. The original version was issued on their debut album, “Difficult Shapes & Passive Rhythms (some people think it’s fun to entertain)” making the Virgin re-release on 12″ the rarity. Rattlesnake synthetic percussion remains a distinction of this song along with Gary Daly’s up front bass lines. “Scream Down At Me” is by far China Crisis’ most extroverted single! It could almost be called ferocious with female backing vocals and some hot fretless bass work by guest Geoff Kelly. It is the closest they ever came to sounding like Duran Duran, that’s for certain! Strangely enough, this track is not extended on the 12″ and represents a real lost opportunity. Rarely again would China Crisis have a single that screamed as loudly “Extend me! Remix me! I’m asking for it!” Funnily enough, the quirky synthpop B-side, “Cucumber Garden,” is what got extended on the 12.”

One of China Crisis’ most endearing qualities was the excellence of their B-sides. Whether ambient, demure instrumentals or out of character explorations that wouldn’t fit on the albums, they represent almost the best picture of the band and an alternative to the increasingly staid material they would release in the second phase of their career. My favorite of their 1st album singles, “No More Blue Horizons,” is a smoothly gorgeous number with a synth lead that fairly reeks of Steely Dan, though at the time, it didn’t register since the track in no other way resembled them. The extended version is as tame as can be, though. Which is fairly typical for China Crisis. Two great B-sides appear on this 12 inch single: “No Ordinary Lover,” their token stab at musical Orientalism which also appeared on Virgin’s “Methods Of Dance Vol. 2” album, and the long, ambient, supremely placid “Watching Over Burning Fields.”

China Crisis entered their robust, sophomore album phase with the sumptuous “Tragedy & Mystery” single. Mike Howlett’s production is the perfect blend of electro and acoustic elements and most importantly, this album features a hell of a lot of guest oboe playing by Steve Levy! The oboe is my favorite woodwind if not instrument altogether, and tracks from this period are positively sick with it! “Tragedy” is also enhanced with an excellent extended mix emphasizing the hot fretless bass playing of new member Gazza Johnson. The B-side of this single is “A Golden Handshake For Every Daughter” a song more than strong enough to sit proudly on the “Working With Fire & Steel (possible pop songs vol. 2)” album of 1983. This track is so good, it even made an appearance on one of the Virgin compilations of the band in recent years. The title cut of the album represents one of the band’s most robust synthpop numbers and featured two wonderful, low-key instrumentals in its B-side: “Dockland” and “Forever I And I.”

Their next single, the resplendent ballad “Wishful Thinking” was not altered for 12″ but the B-sides were. The 7″ contains the excellent, “This Occupation,” a track that sounds like nothing else in their oeuvre, but on the 12″ of “Wishful Thinking,” this track appeared in a radical extended remix (lasting all of 4:36) that sounded like mid-period Cabaret Voltaire!! The cut-up mix emphasized the sequenced and bass heavy synthesizers with a heavy beat that in no way sounded like China Crisis – but I loooooved it! As a bonus, the excellent first album track, “Some People I Know To Lead Fantastic Lives” also got an extended remix treatment on this 12″ making it one of China Crisis’ best.

After this came my favorite of their remixed A-sides, “Hanna Hanna.” The remix emphasizes the stellar fretless bass work that is every bit as good as Derek (Simple Minds) Forbes at his acme. At this point, China Crisis were touring with Simple Minds and the inspiration couldn’t have hurt! This was a track I had never truly appreciated before making this set, but now it sits at the forefront of my mind when I think of China Crisis. Disc 2 features a five track live show from the BBC Rock Hour. Interestingly enough, “African & White (live at Reading University),” one of the B-sides of “Hanna Hanna,” is a live track also from the same show as the BBC concert material but given the differing post-production efforts on the track, I have included both. My guess is that without me pointing this out, the listener never would have known!

In 1985, China Crisis made a huge techtonic shift when “Flaunt The Imperfection,” their third album, was produced by Steely Dan’s Walter Becker. He heard them and liked them enough to mention it to someone in charge and when it came time to record album number three he got the nod. This album even featured lead singer Gary Daly altering his phrasing to resemble Donald Fagen! The players are all sharp enough to reach Dan levels of performance without Becker throwing in any ringers, but as a fan of previous albums, I found this one less than compelling. Ironically, I like it less than actual Steely Dan!

The leadoff single, “Black Man Ray,” appeared on two 12″ singles – the only time the group tried a FGTH gambit. The first release had the LP cut as the A-side with an incredible 11 minute ambient dub mix of “Animalistic” on the B-side. The epic length track fades from the song at the five minute point to a long ambient bridge with koto mixed into it that sounded very radical to these ears at the time (1985) but a few years later was all over the place with the coming of the UK rave scene and the “chillout” genre. After a few minutes of this, the song structure is rejoined in dub form. A truly spectacular cut and as I said, completely radical for 1985. The 7″ version of “Animalistic” is just the first 4:45 of the 12″ version, so I have elected not to include it in this collection but anyone with a wave editor may indulge themselves. Virgin then released a second 12″ of “Black Man Ray” that was identical to the first but for a sticker proclaiming that it also contained the unreleased track “It’s Never Too Late.” So of course I had to buy it! This was obviously a cut left over from the Fire & Steel sessions and was fantastic to have.

Disc three starts out with two B-sides from “The Highest High,” the fourth single from their 1985 album. These are a pair of perky instrumentals with “96.8” sounding heavily Dan influenced and “Orange Mutt-Mutt Dance” sounding very playful indeed. The acoustic version of “Diary of a Hollow Horse” is a great retelling of that number. They probably did this to shake off lingering synth-pop accusations from 1983, but the fact is a song this good doesn’t need production tricks to get it across. When Virgin released “The Collection” best of album in 1990, they commissioned Steve Proctor to remix their debut single and released it once more. Proctor’s 12″ mix of this is China Crisis’ best remix ever! The stately 3 minute ambient intro builds magnificently until the song erupts into full flower for another six minutes or so. Proctor himself rates this mix as his best work and even having heard nothing else he’d remixed, I am inclined to agree!

“Every Day The Same,” the next to last China Crisis single from 1994, appears here in two remixes. This is a case of the mix truly salvaging a so-so song. Sure, the dance mix treatment is usually the kiss of death, but in this rare case it invests the song with some energy! The final CC single from 1996 was a live release of “Black Man Ray” from their excellent “Acoustically Yours” album. In a difference to the stripped down “unplugged” albums then in vogue, this one featured ornate acoustic versions featuring a full band and then some. The B-side of the single had Peter Coyle of Liverpool’s The Lotus Eaters taking lead vox on the durable “Here Come A Raincloud.” And that wrapped it up for China Crisis. No more singles or rarities have surfaced though the band still will play out.

The DVD that accompanies this set has all of China Crisis’ 1985 “Showbiz Absurd” home video (converted from Japanese Beta) with all of their clips from 1982 through the summer of 1985. I have enhanced the brief program with an uncredited BBC appearance of the group miming their 1st B-side, “Red Sails” in a haze of fog such as to make Sisters of Mercy positively jealous! The group look so uncomfortable it’s best they were probably not aware that the hack director also threw in stock footage of sailboats! The last clip added to the program was the fun clip for “Arizona Skies” that actually aired on MTV’s 120 Minutes.