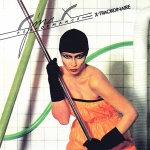 When I finally found a later GXP album in 1991, I have to say that my enthusiasm was curbed by the contents within. Following an all time favorite like “Nice Mover” could not have been easy at the time, but in many ways, the album seems like a step backward in time even as it leapt forward into the digital era. Zeus B. Held by this time was working with the developer of the PPG Wave system; Germany’s answer to Australia’s Fairlight and a favorite of Gary Numan and Thomas Dolby. He was probably using prototypes on this album, but overall, the sound seems less sophisticated than “Nice Mover.”

Part of the reason for this was that the album featured primitive guitars, as played by Dierk Hill. The track “Opposite Numbers” actually features Shaft-like rhythm guitar like I had not heard since Bowie’s “1984” cut five years earlier. The album begins with “Strip Tease,” which traffics in scandal in a far more pat and familiar way than did the transgender-oriented cuts on “Nice Mover.” And the track reveals the biggest gaffe that this album commits; namely, the abandonment of the stately vibe that made “Nice Mover” such an authoritative work.

By comparison, many of the tracks here are herky-jerky New Wave novelty tracks that are heavily syncopated. This has the effect of making Kikoine sing with rapidity and a choppiness that ill becomes her. It’s as if the band moved from Marlene Dietrich electro-torch songs [as produced by Giorgio Moroder on Mandrax] to the second DEVO album for inspiration. Ms. Kikoine was a far better fit with the first briefing.

“Do It Yourself” was a the single and the paean to masturbation was yet more evidence of the group chasing controversy in the wrong direction. Much better was “Opposite Numbers” which, in spite of the dated rhythm guitar I mentioned earlier, manages to attain a more relaxed vibe that fits the talents of Kikoine in a far more appropriate fashion. She’s a vocalist who knows no peer when it comes to prowling like a cat in the late night streets and back alleys of Cologne, but who utterly falls apart when forced to maintain pace with the bouncy melodies that feature in most of these songs.

Side one closes well with “Cologne Intime,” presumably based on the photographic love letter to the city by German avant garde polymath Chargesheimer. While not having the languid pace of the best of “Nice Mover,” the track has a dignity not in evidence in most of these numbers. Unfortunately, the album peaks here as side two opens with “Weekend Twist,” a singsong novelty “New Wave” number that encapsulates what makes this album so vexing to listen to.  The rest of side two is no better, if even less memorable, apart from the wrong-headed closing track, “Ciao Caruso.”

“Ciao Caruso” is a track that delivers little over the course of its far-too-long ten minute length. It is a dead giveaway that the minds that made this album came from a prog rock background. The long keyboard solo at the seven minute mark is hardly memorable. The fact that the song brakes to a sudden stop at exactly ten minutes suggests that it may have been created on a dare. The most damning thing I can say about “Ciao Caruso” is that even edited down to three minutes, it would be no better [but at least it would be shorter]. Comparatively, the ten minute Heaven 17 song from their difficult third album [“…And That’s No Lie”] sports a decent and memorable melody. And the edit of that track almost makes it work at 3:25.

I can understand that the band probably wanted to explore new territory on their followup to an album that, while not exactly popular, did manage to make waves that crested on faraway shores. I’m sure there was an audience for the TG themes it offered as well as the lush and accomplished music that accompanied them. But moving in a lighter and faster direction, with perfunctory nods towards some idea of controversy can’t be said to have panned out well for GXP. If there would be a third album, there would have to be a managerial re-think.