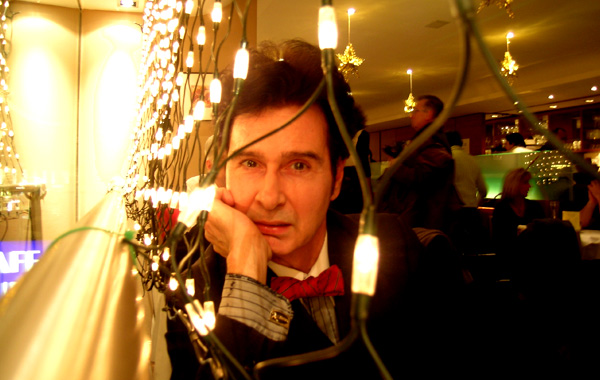 Lat night was a most unusual concert event for me to undertake in that I was not seeing an artist who is heavily, or even lightly, represented in the Record Cell. This is to my detriment. Last week, I was buying my tickets for the Nick Lowe show and upon leaving Harvest Records, I spied a poster on the way out proclaiming that Tav Falco was playing a gig at Broadways a week after the Lowe gig with local instro band The Krektones opening! That’s it. I was there!

Now strange as it may seem, not only do I not have any Panther Burns albums, until last night I have not even heard Mr. Falco’s music ever!! But I was certainly aware of his art from the earliest rumblings back in 1981 when his seminal “Behind The Magnolia Curtain” album was released. My only previous encounter with him was an acting turn he performed in the magnificent “Highway 61” as the foppish leader of a motorcycle gang who doesn’t hurt the milquetoast barber protagonist of the film after a particularly excellent shave was administered. The casting was perfection since Falco is known for [among other things] his sartorial refinement as well as a fervent love of Norton motorcycles.

I contacted an associate in Atlanta, Artie Mondello, informing him of the appearance. I knew him to be a huge Falco fan who has been a staple in my musical life with his many, many different bands over the years. After leaving Central Florida over a decade ago, I recently caught his set at the Star Community Bar on my last trip to Atlanta [where he had subsequently expatriated to] and hearing his latest duo, The Mondellos really put a big fat smile on my face. My musical diet had been lacking in his brand of sonic grease for a little too long. My thinking was, that if he had to, a trip with the Mrs. to nearby Asheville to see Tav would be right up his alley. That was hardly necessary since he was getting a Tav Falco show at the Star Bar… with his strip club instro band project The Delusionaires spirited from their crypt in Orlando to open up Friday night [Oct. 19, 2012] for Panther Burns as well as the mighty Dexter Romweber Duo!! Given that the twin suns of Romweber and Falco have been perhaps the most potent influences on Artie Mondello’s development, he was crumpling up his bucket list while he still had some green on his horns! Scuttlebutt has it that he may even join Panther Burns onstage playing his Theremin!

So last night I made my way to Broadway’s early enough to sign up for a membership to the private club. I hadn’t been there before and after a chat with the helpful bartender to sort out membership, I made my way upstairs to await the show. I’d seen The Krektones  on various other occasions. Ringleader Jason Krekel reminds me of a younger Artie Mondello [minus the dozen or so years of liver damage Mondello has on the lad] with his sideline in trash culture artwork and his juggling of multiple bands like The Mad Tea, whom I also enjoy immensely. This evening they were joined by a pedal steel player who expanded their horizons beyond the garage/surf they normally inhabit to include some credible Western Swing! Nice! I always feel that it’s a darn shame that Crown Records no longer exist to sign this band, because they have that early-mid-sixties fake-surf-with-sax vibe down pat! They played their diverse set to an appreciative audience, and soon made way for the headliners.

Panther Burns drummer, Giovanna Pizzorno, took to the stage adorned with veils, which she removed in a belly dance routine. After removing her extraneous layers, the band joined her and began the evening’s festivities by tearing into some fierce rockabilly to get the fires started. I remember hearing about Panther Burns’ rockabilly in ’81-’82 but over the decades, I’ve picked up on how Tav Falco is a Renaissance man. He finds room to incorporate blues, boogie, jazz, and even tangoes and waltzes into his vision. He seeks to connect with the subconscious via the medium of song [and dance – he’s a long-time tango practitioner in addition to his many enthusiasms] in an almost voodoo sort of methodology.

His band were smoking hot; able to go for the throat with a primeval blues riff or swinging rockabilly cut while turning on a dime to incorporate subtler Euro-Gypsy stylings for one of Mr. Falco’s forays into balladic form. Through it all, Mr. Falco cut an elegant form as a lifelong student of the crepuscular emotions that dwell beneath our surfaces, yet motivate almost all of our actions; overt or otherwise. The sound allowed for his singing and lyrics to be clear and discernible; this was no slop train hitting Broadway’s. From what I’d read over the years about Mr. Falco, he seemed to be the missing link between Bryan Ferry and Lux Interior. A scholar of both the high and low arts who seeks to illuminate glimpses into the the subconscious via both the Apollonian as well as Dionysian pathways for a synthesis of artistic inquiry which incorporates a fuller spectrum of the human condition.

Much of their latest album, “Conjurations: Séance For Deranged Lovers” was played along with what were introduced as early classics from “Behind The Magnolia Curtain.” Side trips into waltz-time and tango rhythms provided were most welcome as were the jazzier stylings of the evening that gave the concert an extremely well balanced mélange to see the audience through two hours of enthusiastic performance. Through it all, Mr. Falco was the loquacious and elegant host for the evening’s proceedings. He was a true gentleman who provided his audience with a diverse feast of sounds and styles. When the show was over, I wasted no time in being first in line to purchase one of the tour’s few remaining copies of the “Conjurations” album, which Mr. Falco was kind enough to sign.

We were fortunate to have finally seen him in concert since he is always turning his energies to other forms of artistic expression. His recently released first book, “Mondo Memphis,” which was written as a pair of volumes with Eric Morse†, is a functional psychogeography of his beloved Memphis that has tongues like that of idiosyncratic Manitoban director Guy Maddin’s wagging. Currently, Mr. Falco is diverting his attention to his own cinematic debut as writer/director of “Urania Descending.” His days of traveling the world [he currently lives in Vienna, Austria] as a troubadour may soon be behind him. Catch him while you can at the following remaining dates. Seeing him in the the fervid environs of Savannah* would be well nigh unto a perfect setting for his Southern Gothic/Old World fusion, if you ask me.

* I only recently visited Savannah for the first time last year and I enjoyed the city tremendously. All the more shocking for it being the first city I’ve ever visited that had no record stores whatsoever!

† Tav Falco has written the historical volume 1, while Morse’s volume 2 is a fictional tome.