Record Review: The Coconuts – If I Only Had A Brain 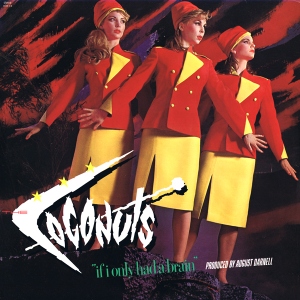 I’m guessing that it was the impact of Bananarama that caused EMI America to sign The Coconuts from Kid Creole + The Coconuts for a “solo” album back in ’83. After all, if three ladies who could barely sing made records with faceless production teams and saw hit after hit happening, why not get women who could sing and already had a smoking hot and immensely capable production team behind them to handle the musical details? Why not indeed? So 1983 was gifted with Kid Creole + the Coconuts “Doppleganger” as well as this side dish, sans August Darnell’s lead vocals, but every inch one of his projects. The difference is the point of view on offer isn’t that of the roguish Kid Creole but his female cohorts instead.

The A-side is absolutely the old chestnut from the soundtrack to “The Wizard Of Oz.” The free-wheeling arrangement takes in Gallic accordion, tympani, and a large brass section in addition to more contemporary touches like synthesizer and drum machine. John Luongo expertly doubled the length of the brief album cut to make a five minute 12″ version that hits just the right notes and leaves you wanting more. The selection of song for the A-side is somewhat surprising, but the arrangement is so vibrant, that even if you’re largely immune to the charms of “The Wizard Of Oz” as I am [I didn’t see it until I was in my late thirties], you’ll get swept along on the tune’s sunny afternoon vibe fairly effortlessly.

The B-side is another track from the “Don’t Take My Coconuts” album, but this time it’s written for the ladies by Darnell and he offers up the woman’s perspective on some fairly typical Kid Creole shenanigans. The drum machine is still ruling the roost, abetted by tympani and various percussion but the sound is more “tangy” with the luscious vibes of Philippe Saisse counterpointing Darnell’s clean and vibrant lead guitar licks.

The ladies are up to here with Creole’s blatant tomcatting and offer up lyrics like:

“Sister says, when I’m not here
You love to touch, her derrière
You’re so indiscreet, don’t apologize to me
[don’t wanna hear it]”

It’s kind of a stretch rhyming “here” with “derrière” but it’s so affected, one has to stand somewhat agog at the conceit of it! Color me impressed with its, …uh, cheek.

As with the A-side, the extended remix has been entrusted to the dynamite hands of John Luongo, who fits in well with the idiosyncratic world of August Darnell, a gent who takes inspiration from the likes of Cab Calloway instead of Bowie and Kraftwerk! “Indiscreet” has been doubled in length to another five minute extension that works like a charm. Bonus points for the false ending that presumably Luongo tacked onto the song’s coda that revives it for another minute or so when one least expects it.

I have a lot more admiration for the world of August Darnell than I do actual records in my Record Cell, which pains me somewhat. When I play what I have, I always enjoy it and wish that I had some more of this great music. Apart from this 12″ and a killer CD compilation, that’s it, I’m afraid. One day I will have to go off on a wild tear and grab up as much of this stuff as I can. The full Coconuts album [only released on CD in Nippon, of course] has two other 12″ singles released from it and one of them is a version of Cristina’s holy “Ticket To The Tropics” for crying out loud!

8 Responses to Record Review: The Coconuts – If I Only Had A Brain