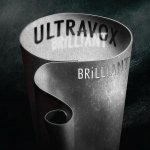 The album continues with the track “One,” but you’ll probably wish it hadn’t! It begins with an atmosphere so still, you’ll be checking your own pulse just to make sure you hadn’t expired by accident! Ure’s vocals are heavily filtered on a shortwave radio in the next room as after a full minute, the song’s plodding beat begins. It’s sheer Chinese-water torture to accompany The Gnome’s lead vocals. So leaden is the pace that you’ll never believe it only 4:43! Did I say that “Stranger Within” starts to drag around the five minute mark? Slap my wrists! What I wouldn’t give for an injection of that right about now! To hear this poor excuse for a song is to know what it’s like to slip into a coma.

Then with track nine, the killing blow was struck. The album, which had teetered at the precipice for over a half an hour, edging closer here, backing up there… finally fell gracelessly off of the cliff right then and there and hit the rocks below once “Fall” got underway. Not a pretty sight. This was without a doubt the most dire and tuneless thing that not only Ultravox but also Midge Ure under his own name, had ever conspired to release! You know you are in for a bad time when yet another plodding, lumbering track [enough reason for bruxism right there]  dared to feature a hook that was in the words of Eno “a dismal, pathetic chord sequence!”

It was a descending series of guitar chords, not unlike the one that had distinguished “Moon Madness” on “UVOX.” That it appeared once was a tragedy. That Ure had determined that it was hook worthy and as such, is repeated throughout the song, indicated a lack of intelligence and objectivity on his part. That the rest of the group let him get away with this was proof that this enterprise was doomed from the start.

The next cut, “Lie” is the single bright spot on side two. Like Ultravox you grew up with, it features good sounding, reasonable singing from Ure. The Gnome is nowhere to be heard this time. The tune wouldn’t make you forget the glory of “Vienna,” but amid the fiascos that surround it, it’s enough to make it seem like a “Systems Of Romance” outtake in comparison! Even still, it’s saddled with a dreadful, unimaginative middle eight, like virtually every song on this album, that really indicates large problems for this once capable band.

“Satellite” is the singular quick-paced cut on the second half of the album. It’s lively, yet still skirts mediocrity, due to Ure’s space-filling lyrics and the truckload of effects used on his vocals here. The band have gone on record as endorsers of the Melodyne system and while it had been abused, in my opinion, throughout the album, it really hit the brick wall here. Ure’s voice has been sculpted like silly putty on this track, creating a vast distance in the place of the immediacy that we listen to music for. Or I do at any rate. The standout element of this cut is definitely Currie’s vibrant viola solo. Listening here, you can almost imagine that you are hearing one of his fine solo albums. Better you had picked one of those up!

And then it all comes crashing to a pitiable end with the final cut, “Contact.” The Gnome is back for one more twist of the killing blade. While “One” and “Fall” are definitely the worst songs Ultravox have ever recorded, this track is number three in that list. Ure sings like he’s going to expire from the consumption. And if you were singing these lyrics, maybe you would too.

“What’s wrong, who’s right?
Sad machines won’t talk to me tonight
No questions looking for answers
No voices except inside my mind”

“Sad machines won’t talk to me tonight!” That’s a lyric on par with these from Simon LeBon in my Leonard Pinth-Garnelle Hall Of Fame for Bad Lyrics. The whole affair grinds the already faltering album to a merciless halt. It sounds like some horrifying cabaret parody with a ninety five year old man trying to sing over a heart lung machine burbling away in the background as twee synth loops form a gently chugging rhythm bed from hell. The first time I listened to the whole album and that was the ending, I have to say that I was incensed.

Moreover, the more that I listen to this album, the act of doing so only makes me angry as the horror unfolds. I am incredulous that Ultravox had the poor judgement to let this one out of the closet, especially after the career-killing “UVOX” debacle. What’s ultimately even more annoying about this album is that while the lows are even worse than that album, the three tracks here that I actually like annoy me all the more for their presence! It’s the sense of squandered opportunity that this album delivers in spades. While objectively, this is a slightly better album than “UVOX,” it actually feels worse to listen to because the numerous low points are cataclysmically bad in ways that leave the “UVOX” material very much in the shade.

To make a point of comparison, the last time I heard an album with a comparable blend of good points to bad by an artist who had really needed to overcome the enormous badwill generated by two stinker albums in a row to rekindle my fandom, it was “Never Let Me Down” by David Bowie. For every good idea there were a dozen bad ones to simultaneously remind you that you were a fool to think he could pull his artistic fat out of the fire as well as why you may have ever liked his work to begin with! This is definitely that kind of shattering artistic failure. One that, frankly, puts a headstone on my Ultravox fandom. Fool me once, shame on you. Fool me twice; shame on me. As with Midge Ure’s solo career, I have reached the point of no return and will no longer be buying any new recordings of Ultravox. There’s only so much abuse these ears [and mind] can take. 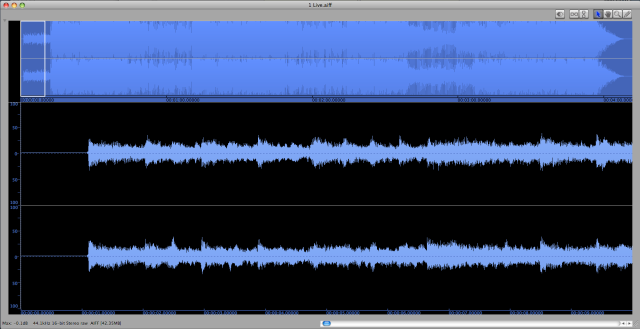 Sonic horror rendered in pixels. Click to enlarge… if you dare!

Speaking of ear abuse, it is my displeasure to report that the brickwall mastering on this CD is the very worst I have ever heard. It has snatched the dreaded Tin Ears Cup from Duran Duran for their “Red Carpet Massacre” album. Click on that wave image to wonder in awe at the max volume of -0.1 dB. There is almost no dynamic range at all here. This album sounds absolutely ghastly. The drums in particular sound painful to hear; like firecrackers exploding and the cymbal crashes are unbelievably harsh to the ear. Headphone listening was like a form of torture. It adds a level of injury to insult in the playing of this disc. Ultimately, one is saddled with an album by a band you used to like filled with poor songwriting [for the most part], even worse singing, a life-sapping production that’s over reliant on gimmicks in the face of no ideas or anything to say, and ultimately given just the sort of mastering that, frankly, it deserves. But we deserved better.

Finally, the Rock G.P.A. for Ultravox is thus: a 2.73 or B-. A bit higher than I was expecting but three 4.0 discs in a row manage to average out a lot of failure. 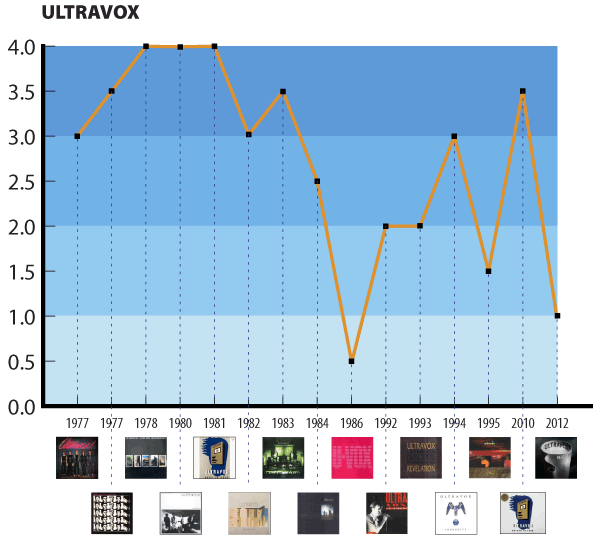