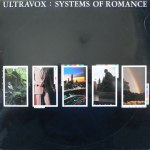 The third Ultravox album saw them eschewing the exclamation point they “borrowed” from Neu! and they made a few other changes as well. Guitarist Stevie Shears was out, having been replaced by Robin Simon of Neo, who borrowed their name from Neu! After two albums with Steve Lillywhite, some genius [I’ve never learned who, exactly] put two and two together and the band ventured into Germany proper to record the album with the legendary Conny Plank, producer and engineer of Neu! The results were spectacular, to say the least! The resulting album is my favorite Ultravox album by far and one of the most influential albums I’ve ever heard. The group were so far ahead of the competition it staggers my mind to think that this album was released in 1978. I only heard it for the first time in early 1981 and really wish I had been on top of it from day one.

Another sea change at this time was singer John Foxx’s adoption of the Quiet Man persona to thematically drive the rest of his rock music writing going forward. Foxx cannily wrote his unpublished “novel” of the same name as a means of exploring the themes he was most interested in as a free-form work of fiction/poetry that put his concerns into evocative language. The resultant prose became the foundation of almost every song he wrote going forward. These themes are, in short:

His fascination with British psychedelia [he was a big fan of “Rubber Soul,” “Revolver,” and early Pink Floyd] finally manifests itself here with songs that deal with internal transmutation amongst a fluid environment. Foxx admits that the writing was a creative exercise, not necessarily and end in and of itself, but it certainly has resulted in a coherent and vibrant lifetime’s body of work. From this point onward, hearing a John Foxx record meant that you would almost surely be hearing a record that addressed these themes. Usually with a synthetic rock music accompaniment; never better than on this album.

The influence of Krautrock is the other huge presence felt here. This is the album where they first collaborated with the architect of the sound himself, Conny Plank, and the influx of synthetic sound ala Kraftwerk really hits its stride after being hinted at on the preceding two albums. And finally, the motorik rhythms of Klaus Dinger [Neu!, La Düsseldorf] enter the Ultravox vocabulary here, as Warren Cann alters his rhythmic vocabulary to incorporate them into his bag of tricks.

The album begins with the lead off single, “Slow Motion.” The song is heralded with Robin Simon’s heroic ascending guitar riff that is joined and builds power with a similarly ascending, sustained synthesizer riff.  A throbbing bass riff then unifies the energy and eventually the drums kick in to finally release the tension that has built throughout the introduction. The song features massive and surprisingly funky synth bass from Chris Cross. Apart from Bernie Worrell in Parliament [working in a vastly different idiom and method] I can think of no one else who was using bass synthesizer in 1978. The resulting sound is absolutely powerful and forms a muscular foundation upon which Foxx builds his lyric narrative upon. If I could have only a single Ultravox song, this would be the one. It blew me away the first time I heard it and after hundreds of listens and 31 years I’m not tired of it yet.

The next track is another stunner. “I Can’t Stay Long” opens with Cross’ bass juxtaposed with Robin Simon’s repeated guitar strum processed to sound like a phalanx of cellos. Currie and Simon intertwine their instruments to create a perfect synthesis of synthesizers and treated guitar that sounds like nothing else. Primarily, this is music that brims with flowing energy like no one else in England was making at the time. It has the grounded hum of a power station yet ebbs and flows with the ease of quicksilver. Foxx echoes its nimble energy with his vocal here that confidently leaps into the void with a passion and power that is breathtaking. His lyrical imagery touches on departure and instead of seeing sadness, he infuses it with a yearning quality that suggests that it is both necessary and desirable.

“I like to glide in the long, green light
Of a July afternoon, sliding down a vague conversation.”

“Someone Else’s Clothes” is another look at the mutability of identity via the metaphor of clothing. Blasts of foghorn synth; impossibly deep, anchor the song’s middle eight as Simon’s flanged guitar licks soar like horns. “Blue Light” buzzes with energy like a swarm of wasps in a disco. Side one ends with what has become one of my favorite songs on the album after over 30 years of listening to it.

For the last decade, I absolutely need to play “Some Of Them” at full volume every six months or so to blow out the cobwebs. This song has the most impressive intro I’ve ever heard and make no mistake; this song might not have a single synthesizer in it. That would make it the most conservative song on this album of covering new territory. But that wouldn’t make it any less massively powerful. It opens with a series of percussive guitar ganks that sound like a fissure opening in a dam, then the pummeling bass and drums begin to unfold staccato bursts of energy that get joined in turn by guitar again with a series of slashing riffs that all but obliterate the dam as the drums multiplex and raging torrents of sound engulf the listener in a tsunami of accelerating force. Then Foxx begins singing and its all over. You just have to hold on and ride the 60 foot wave for the next two minutes until the song reaches its abrupt conclusion. It’s one of the most thrilling songs I’ve ever heard, and playing it is difficult because I have a tendency to keep replaying the intro at full volume over and over again.

Side two plunges deep into electronica with the second single, “Quiet Men.” The Roland CR 78 hammers out a roborhythm as Simon’s guitar etches stark riffs which are elaborated upon by Currie’s synth fills. Simon’s riffs seem to evaporate as he’s playing them during the song’s middle eight. The next track is the pounding psychedelia of “Dislocation.” It opens with a metallic rhythm racheting upward in pitch as Foxx’s spectral chants enter and are grounded with a massive heartbeat rhythm with the presence of a leviathan’s footsteps. Chris Cross’ bass synth is a portent of doom as Foxx elaborates on a possible psychotic episode. The spoken middle eight will seem familiar to many who have never even heard this track. More on this later.

“The sun was going down one quiet evening
A stranger came into the room while I was half asleep
We spoke for a while, I couldn’t see his face
Later on while he was gone I realized I didn’t catch his name.”

“When You Walk Through Me” is more techno-psychedelia driven by a drum pattern nicked from Foxx’s favorite Beatles’ song, “Tomorrow Never Knows.” It opens with the most  inviting imagery lyrical imagery Foxx has ever used up to this point.

“It’s warm tonight, it rained tonight
The windows are all open wide
Can’t see the clock to check the time
Nothing is moving”

Currie’s overdriven synth vies with Simon’s flanged licks while Cross moves back to guitar for this one.  The song’s middle eight moves into cosmich musik territory while the drum pattern stays as steady as a rock and Foxx revisits the opening stanza again. Cann’s drum fills on the outro join his primary pattern to drive the song to its conclusion.

The final song could be called the first electronic ballad if Kraftwerk hadn’t gotten there a few months earlier with “Neon Lights.” “Just For A Moment” is grounded upon a massive electronic heartbeat rhythm that echoes the one used in “Dislocation” albeit without the song’s undercurrent of dread. Foxx sings the verses in a distant echoed voice that sounds cool and detached until the verses, where he erupts in a passion previously touched upon on “I Can’t Stay Long,” but there is a sense of impending loss here as if he is desperately trying to retain something vital.

The song’s middle eight abruptly stills the heartbeat that has been constant throughout the song and finds Currie breaking the tension with a return to Satie-esque piano chords. But this placidity is eventually undercut by reversed string chords that hint of unease. The song is impressive. Passion and intimacy are its characteristics and one can’t help but think that this song laid the groundwork for the overblown grandiloquence of a certain Ultravox song of the future. Particularly when taking its unique rhythms into account.

After releasing their third album on Island to yet another chorus of deaf ears, they dropped the band from their roster. Ultravox managed to do a self-funded tour of The States in 1979 where, courtesy of the low expenses of a F.B.I. tour by Ian Copeland, they managed to finish up with a few grand in their pockets. But the writing was on the wall. Foxx was restless. He’d been with the band for five years. The possibilities he saw in synthesizers made him less reliant on a group to get his ideas across. At the end of the tour he left the band and so did Robin Simon, whose guitar had been positively catalytic to their new, mature sound. This album didn’t sell many copies. Sure, Gary Numan bought one, and he became more determined than ever to get a piece of this action. But he wasn’t the only musician taking notice.

“I had thought that on their third album, Systems Of Romance, they had found themselves. I loved that album. Rusty [Egan] used to play “Quiet Man” and “Slow Motion” down at The Blitz, where they were one of the key musical influences.” – Midge Ure