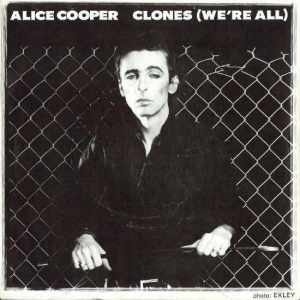 From time to time we’ve paused to excoriate the flabby, aged rockers who have tried , with varying levels of failure, to hitch their wagon to the exciting new sound of New Wave, that was not exactly spreading across America in the late 70s. Why then, did they traffic in this self-deceit? One might assume that they had spent too much time in the chic discos of the bright young things who partied in NY/LA. If they had ever left their limo backseats and encountered the “real America,” that people like me lived in, they would have understood that the appeal of this “New Wave” was strictly with fringe boho malcontents with liberal arts degrees, and that mainstream America didn’t read “Interview” and cared more about six-packs and tractor pull events.

So in an ill-informed quest for “hipness” and “cachet,” many a long-in-tooth rock star dabbled with the New Wave with the net result being embarrassment [one hoped]. But not all succumbed and ended up with egg on their faces. Some, like Alice Cooper, managed to craft fantastic records like this one which were not downmarket slumming but actual reveling; resulting in records that approached mastery of the form!

“Clones [We’re All]” begins with the sound of a trusty Roland CR78 plugging away with some good, old fashioned rhythm box chug followed by the doppler shift of a siren guitar. Then when the tritone synthesizer riff begins, all bets are off as what sounds like a killer tune from the first Cars album unfolds. Which is not surprising since this record was produced by Roy Thomas Baker. After some stark, punk-ish power chords, Cooper joins the tune with a marvelous narrative of alienation and identity loss that takes classic New Wave tropes and flies with them!

The middle eight expands the narrative to tell of “number six” who is having trouble adjusting to his status as a clone! Yeah, I smell a “Prisoner” reference too! The tale of lost individuality has more than a whiff of DEVO to it and in fact, seems to presage elements of their “Puppet Boy” which wouldn’t exist on wax for another four years. Cooper nails the emotional core of the song with the refrain of “I just wanna be myself, be myself, be myself.”

The production is classic RTB New Wave, and now that I think of it, he’d be manning the boards on the “Oh No, It’s DEVO” album two years hence. The vocal production favors dry, isolated [of course!] vocals from Cooper and he adopts several points of view that have their own treatments to differentiate them from one another. This was Cooper’s last top 40 single for many years until his late 80s pop metal resurgence, but one can’t help but be impressed with his results on this number, which was written by one David Carron. In picking this song and choosing Roy Thomas Baker to produce it, Cooper showed enormous savvy in being a singular reptile capable of shedding his hard rock skin for some angular New Wave that hits multiple high points of the genre without failure. I’m certainly going to have to investigate the full “Flush The Fashion” album from whence this came and report back with my findings.