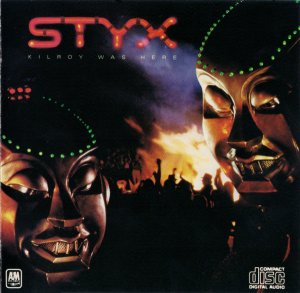 Styx had sold millions of copies of their late 70s albums. They could have kept grinding them out like sausages. What possessed them in 1983 to mount an elaborate tour/album based on an incomprehensible concept album storyline a good  seven years past the sell-by date for concept albums is a mystery that provokes only head-scratching 29 years later. What takes it into pounding migraine territory is the music itself!

Not only did the corn-fed prog rockers seek to reanimate the corpse of the concept album in an era where it had no place, they sought to do it by appropriating New Wave tropes like DEVO-esque herky-jerky rhythms and heavy use of vocoders! I’ll never forget the fanfare with which MTV world premiered their video for “Mr. Roboto,” the lead-off single from the “Kilroy Was Here” album. I was stunned, actually, to see the band trying to shoehorn its penchant for bombast into a more moderne wrapper. Like the worst of rock in a nutshell, it fails at managing to honestly be the ersatz schmaltz/prog-lite bombast the group was counted on to provide by their legions of Clearsil® Commandos. Nor does it come even laughably close to the “edgy” sound that DEVO proffered – though the rhythms attempting a “Whip It” sound are a dead giveaway. What it sounds like is a really bad attempt at a Broadway show!*

The backing vocals during the song’s verses are a dead giveaway. And you can’t keep a good man down as Dennis DeYoung just can’t resist breaking out his Rock Tenor Shriek®. Happily, I hadn’t heard this since it was released to the sound of crickets in 1983, but for the sake of re-acquainting myself with it before unleashing this torrent of bile, I felt that a renewed exposure was in my best interests. My mistake! The mists of time had rendered my disdain for this, above all other STYX® bilge, into a somewhat gauzy focus that has been brought screaming  back into sharp relief after a quick jaunt to iTunes, which mercifully has only 90 seconds of the song to preview.

The whole Mr. Roboto image also pointed back to the DEVO influence on this whole mishap. The stinging irony here is that by 1983, even New Wave was on its last legs! It was morphing into easier to digest “New Music” instead as the cuddly spectacle of Boy George was preparing to storm the charts. Meanwhile STYX® were serving up incomprehensible twaddle in DEVO’s old jumpsuit! I’ll admit, that when I did a little research to write this post, I only knew about the album what MTV broadcast 29 years ago. If you thought the whole Kilroy Koncept® was hard to follow then, try the liner notes on for size!

Apparently the internal stress that band endured whilst producing this magnum opus caused the platinum machine to suffer a breakdown. Tommy Shaw left to a stillborn solo career before joining The Nuge® to form Damn Yankees. Dennis DeYoung had a reasonably successful solo album with lots of his trademark mushy ballads. STYX® existed long enough following this career killer to issue a live album, “Caught In The Act,” which contained a new studio song which is what crossed my mind the other day. The imbecilic refrain “Hey everybody it’s music time” popped into my skull and I misattributed it to this album, since it sounded nothing like STYX® but instead was more of the Nerf New Wave style as evidenced on “Mr Roboto!”

* FUN STYX® FACTS: In 1994, Dennis DeYoung did in fact record a cover album of Broadway Standards! In 2008 his musical based on The Hunchback Of Notre Dame had its off-Broadway debut in Chicago!