Posted on September 27, 2011 by postpunkmonk

This is not specifically a New Wave Compilation, but the timing of this label comp plants it with one foot in the mid 70s and one foot in the early 80s. Virgin Records were undergoing a shedding of skin from their earlier incarnation as a hippy-prog label to something more moderne at the time. This was a record typical of its times when newer music was not necessarily getting airplay and the labels, having invested in their future [like they used to] needed to goose the marketplace with records like this one. I first heard this album when my friend Charles bought a copy on its release and I kept my eyes peeled for a copy for many, many years until some time in the mid-90s when a friend, not even knowing that I had been looking for a copy for well unto 15 years, saw a copy and bought it for me out of the blue! “An Album For The Price Of A Single.” How could you say no? 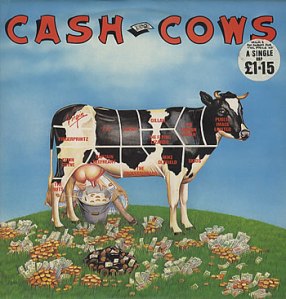 The album starts off with a rollicking XTC single from their major “Black Sea” album. I’m not certain, but I may have already had the album from whence it came by this point. It’s hard to remember clearly. In any case, it’s a fab slab of XTC at the top of their New Wave game with a cheerful look at class warfare, British Style. I can’t remember if this is the edited single version with the naughty bits recut or the full-monty LP version. I’d bet the latter since I think it’s release as a single might have followed this album. Yes, research shows that it was a single the following year.

I mentioned earlier in some comment threads that OMNI magazine was where I’d first heard of The Human League. It remained until this album, however, before they reached my ears. Lieber gott im himmel, I can’t imagine a more astounding first track to hear by this band! It begins with a whipcrack rhythm executed on a synth with a loving application of reverb for a few measures, and then the carnage begins! A phalanx of analog synthesizers soon kick in with the most violent and aggressive synth riffs I’d ever heard as the singer, dryly intoned the wittiest science-based lyrics I’d ever heard about a record which became a cosmic singularity, or black hole.

The accuracy of the lyrics in describing this phenomenon indicated that the creators of this song were serious geeks, much like myself. There were James [“Connections”] Burke in-jokes included as a tip of the hat to their fellow geeks. Had they been American, [unthinkable, really] they would have name-checked Carl Sagan instead. Really, this track sounds like the BBC Radiophonic Workshop exploded during a particularly difficult Dr. Who recording session! I became a dyed-in-the-wool Human League fan instantaneously on the spot! I soon began buying their records as import singles when “The Sound Of The Crowd” got released the next year.

This track was followed by the antithetical “Sheba,” which is a lovely track from Mike Oldfield’s “QE2” album, which by 1980, saw him altering his spots by eschewing his prog roots somewhat for something a bit lighter and pop focused. I later bought the album, which was the last Oldfield record to enter my Record Cell going forward. The next track had a significantly bigger impact in my life.

Their absolutely unearthly cover of “Ain’t That Peculiar” marked the first time that I’d heard Japan, fresh from their “Gentlemen Take Polaroids” sessions. I was already a Roxy Music fan and I was gobsmacked by the incredible similarity of singer David Sylvian to Mr. Ferry. This was the first, but certainly not the last time I’d make this comparison. The arrangement of this Smokey Robinson song, which I was aware of but hadn’t yet heard*, was the absolute furthest thing from Motown soul imaginable. The languid fretless bass was absolutely serpentine. Together with the impossibly creative meter of the drumming, a ferocious rhythm section was forged that created something deeply funky, yet seemed to have the trappings of avant-garde jazz when taken at face value. I’d only grown up on ELP records. I simply hadn’t heard musicianship of this caliber before.

* Laugh if you will, but I finally heard the original version of “Ain’t That Peculiar” only a few years ago on the oldies channel they play at my gym.

The Ruts and The Skids are more garden variety New Wave bands at the time that provided good tunes, but didn’t manage to make the level of impact on me at the time that bands like XTC, The Human League, or Japan did on first hearing. As such, they represent exactly the sort of band I’ve been digging into for the last 20 years; acts that were contemporaneous with my favorite bands, to whom I wasn’t paying much attention to at the time due to keeping up with Japan, OMD, Ultravox, John Foxx et. al. I have The Ruts album “Crack” penciled in on my want list and there was a week about nine years ago when I listened to “Into The Valley” by The Skids on repeat, as heard on a New Wave Retro Comp CD for several days straight to the exclusion of any other song! I must have heard it 500 times in a row. It was only the second Skids track I’d ever heard following “Arena” on this album and something about it just stuck in my brainpan like nothing else I’ve ever encountered, obviously!

Next up was a controversial track. The Professionals was Cook & Jones from The Sex Pistols making their own brand of music without Malcolm “directing” things. “Kick Down The Doors” sounds like fairly good pre-punk rock music; think Mott The Hoople without Ian Hunter’s perceptive lyrics. The controversy occurred when Virgin released this cut in advance of their album without Steve Jones permission. He saw fit to take Virgin to court and won, causing this record to be deleted and replaced this song with a Magazine track. I can’t find hard data on the alternate UK version 2 of “Cash Cows,” but I’m guessing that it might have been “A Song From Under The Floorboards” from “The Correct Use Of Soap,” which also figured on the version of this album issued in the Canadian Territories.

I think just about everyone must have heard The Flying Lizards’ New Wave deconstruction of “Money” when it was released. It was one of those “you won’t believe it” New Wave cover versions that definitely made an impact in the late 70s. Conversely, practically no one ever heard anything from the second Flying Lizards album, “Fourth Wall.” But I did. I was absolutely mesmerized by “Hands 2 Take.” I’d never heard such tooth grinding nihilism before in my life and I was spellbound! It sounded nothing like the wacky deconstructed electro dub of the first album. The distortion on Patti Palladin’s vocals is still absolutely unique to my ears. I wanted more and I wanted it now upon hearing this track, but to this day I lack the “Fourth Wall” album. I plan on rectifying that pretty damned soon though, since Cherry Red bought out the first two FL albums on RM CD last year and I’m preparing a CD spree. Heck, it took me 15 years to have this track on this LP after years of searching! My friend Ron only just found this album on vinyl, and he’s been looking in Southern California.

Fingerprintz were a great Scot band fronted by Jimme O’Neill, who wrote a lot of songs for Lene Lovich’s first album. He’s a real capable tunesmith, and “Yes Eyes” is immediately winning power pop, replete with ringing guitars and booming drums, from the second Fingerprintz album, “Distinguishing Marks.” It’s hard to imagine a universe where tunes like this one aren’t bursting out of the top ten, nevertheless, that’s the sad place where we find ourselves. I have the first and third Fingerprintz albums, but this one, the first to reach my ears, remains elusive.

I’ll have to go out on a limb and admit that I’ve not really played the last four songs on this album more than once. Gillian not at all. I’ve never really investigated Capt. Beefheart too closely, due to the Zappa connection. What little I’ve heard was way more enjoyable than Zappa, but I’m still wary. Ian Gillian came from the “Machine Head” era of Deep Purple, and I’m partial to “Hush” myself, so it’s a no go there. Kevin Coyne just looked like The Class of Virgin ca. 1973 [and was!] and the PIL track was a live song from the not-in-my-collection “Paris Au Printemps” that was utterly pointless, but well titled.

So ultimately, this album did expose my ears to some new obsessions; some of these groups here would become core collection bands that I’ve stayed with ever since. I’ve subsequently amassed many Human League and Japan records. I’ve tried my level best to obtain all of the Flying Lizards releases. Apart from their first album “hit period” it’s damned hard work!  I have 2/3 Fingerprintz albums and am eying their singles for a BSOG®. Others are threads that still tantalize and will probably spur me on to investigation one day.

Next: The Cash Cow Variations!