Posted on September 26, 2011 by postpunkmonk 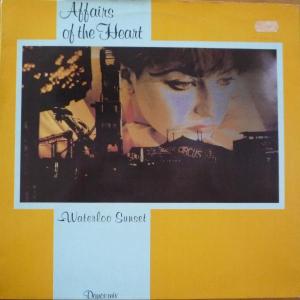 This was a record that a friend of mine bought decades ago; probably the period when it was released. I only just got around to listening to it since I’ve been “record sitting” the disc since my friend’s collection needed a more stable home for a long period of care. To answer your question, yes it is the Kinks song given a coat of 1983 paint. In this case, that means delightful synthpop using the tail end of analog synth gear just before the dreaded Yamaha DX7 began putting its digital boot to the groin of synthesizer music the world over.

The 12″ certainly doesn’t give value for money since only three mixes of the song appear on the 12″ with no other sings in tow. The 7″ version has the short version and the “Scrub Mix” [?] on the B-side, but I don’t have that record. For the record, the “Dance Mix” is the best thing to listen to. It’s a wonderful, sprightly cover of “Waterloo Sunset” with a winsome female vocalist carrying the tune over a nice period music bed. It’s not a beat heavy track. It’s more of a synthpop number than a dancefloor filler. The 7″ version is pretty much an edit of the dance mix and as such, is somewhat redundant. The “dub version” is typical of UK 12″ single dub mixes of the period; that is to say, it’s really an instrumental version. Lee Perry need not break a sweat. The only producer off the top of my head who made actual “dub mixes” of UK groups in this period with any panache was the late, great Martin Rushent.

I’d like to talk about the band more but I’ve come up empty-handed on getting any details on this release regarding the actual musicians performing on it. It was released on the Briston-based indie Heartbeat Records, and was produced by Steve Street. Initially, I assumed [incorrectly] that the production was an early one by Stephen Street but careful scrutiny reveals that the Steve Street who produced this record was a completely different individual. In fact, he is the same Steve Street who played bass for The Europeans. The other Stephen Street was working at Island Records as a staff engineer at one of their studios during this time.

What we have here is a pleasing, one-off New Wave cover version single by a band who probably had their one shot in the studio and they did this fine cover version in a session that got remixed a couple of times to fill out the two single formats. I suppose I should admit publicly, that I’ve never heard The Kinks original version, nor indeed, any of the other versions of this winning song. So one could say that I was truly judging this record on its intrinsic merits.

10 Responses to Record Review: Affairs of the Heart – Waterloo Sunset