Posted on September 22, 2011 by postpunkmonk 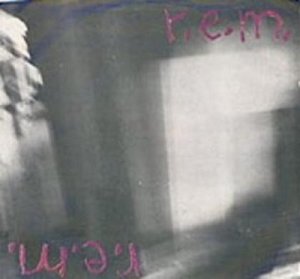 I really can’t say why it happened, I only know that it did. In the summer of 1981 athens band R.E.M. released their first indie single; their initial recording of “Radio Free Europe.” I lived in Orlando, Florida at the time. The song was an instant hit on WPRK-FM, my local college station of choice at that time, which I was listening to a lot. I heard the song and liked it. It had a good feel to it and Athens was hip following the emergence of the B-52s. I thought about getting the single since I saw it in the better local record stores by that Fall.

Ultimately, I never bought a copy since it was in such heavy rotation on WPRK-FM, I heard it more than enough times. Besides, I didn’t like it quite that much to actually drop coin! You’d hear that single blaring out of the speakers every other time you were in one of Orlando’s finer record stores. Okay I get it. They’re popular. They don’t suck, so that was good and they managed to immediately strike a vein of interest in Orlando, Florida, for some reason. Nice going for guys in Athens with no money.

By the time that the “Chronic Town” EP was released after the band had signed to IRS Records in the Summer of 1982, Orlando was in the throes of R.E.M. fever. This time I’d bought a copy of the EP and could no longer afford the prices that the Hib-Tone single was going for locally. It was okay, but not as memorable as the single. Whenever I saw a local band play, damned if R.E.M. [with only a handful of songs released] were the template for the clone wave that followed. Between hipsters playing the records in public, or local bands following slavishly in their footsteps, you’d be forgiven for thinking that perhaps R.E.M. were a local Orlando band at this time.

All bets were off when R.E.M. released their debut album, “Murmur,” in the Spring of 1983. Everyone had the album immediately, even me. The band had re-recorded their debut single in a less murky version for the album, which was a lot more solid than the EP had been. When the manager of one of Orlando’s local record store chains “went solo” to establish his own store that Spring, of course it was named Murmur Records! I had the album, but I didn’t need to play it, really. Everywhere I went, there it was on the speakers. Record stores played it constantly. When attending college parties, it was part of the soundtrack on the stereo. Art classes held were to its accompaniment. Rock clubs played the songs at every visit. There was even a local band named Stumble, fr’ crying out loud!

I often wondered if this was just a local Orlando phenomenon, or was it happening all over the place. I really didn’t know for certain, but I did know one thing. I was getting burned out big time on R.E.M.! Come the spring of 1983, I even remember having some wag thrust a petition to I.R.S. records to have the band play locally on tour! By this time I had begun to crack. While I liked the band well enough, I couldn’t quite see how they were so vastly popular in the place of bands I really held a torch for. By the end of the year, I had come to resent R.E.M. for their omnipresence and popularity far in excess to my perceived worth of their art. During the Great Vinyl Purge® that first occurred in 1985 when I could trade in used vinyl and get credit to buy glittering new CDs, both R.E.M. records were on the shortlist to get the fast eject from the Record Cell.

By the time that they turned up on rotation on MTV, I was way past caring, and came to see them as the enemy. They had inspired a wave of US proto-Americana acts that were part of a reactionary wave against all of the arty synthesizer bands I preferred and valued more than their 60s retro-Byrds blatherings. Ultimately, their middlebrow antics went from underground to mainstream in a few short years, and helped make the media a little more tedious as the Post-Punk wave hit the middle of the eighties and ebbed as its practitioners lost their path and became subsumed by mediocrity.

By 1986, the band was poised for mainstream success. A friend of mine wanted to see them play in some arena in Tampa on their tour, and asked me if I wanted to accompany him. Who wants to trek 90 miles away alone for a concert? Fortunately, the opening act for the tour was their producer Mitch Easter’s band Let’s Active, so I was ready to sign on the dotted line! Even though I was beyond bored with R.E.M., I loved Mitch Easter’s music! Let’s Active really had the goods, as far as I was concerned, and this was the band’s tour for their transcendent second full album, “Big Plans For Everybody.” I had been wanting to see Let’s Active ever since their first EP hit in 1983 and the band did not disappoint! This was an amazing batch of songs that were largely performed in the studio by Easter alone. Live with his new band, they completely rocked. And since they were close, personal friends of R.E.M., they were allowed an encore. They happened to cover Billy Joe Royal’s awesome “Hush” in the Deep Purple style! Afterward, I managed to nap as the R.E.M. concert was underway.

It’s funny. To this day I’m over R.E.M. and news of their retirement only makes me think – finally! Don’t those guys have enough money by now? On the other hand, I’m satisfied that they won’t get the chance to outlast the Rolling Stones in the longevity sweepstakes. I would feel very sorry for anyone who manages to outlast The Stones! Curiously, I’m a big fan of the guys who produced those early R.E.M. records I’ve heard. I’ve seen Mitch Easter and Don Dixon numerous times in concert and don’t plan on stopping any time soon. And as a Warren Zevon fan, I want to get a copy of the Hindu Love Gods album, which is among the few of Zevon’s not yet in the Record Cell. I’m just glad that I won’t have to duck R.E.M. any longer!