While “Skyscraping” was an exceptional album of the kind that was a resounding artistic success, it’s impact in the marketplace was muted at best. Fry had gotten wrapped up in live performance as a more lucrative path to pursue.  That provided a living, and it was something he’d not really embraced to this extent before, but apart from the live album recorded during the 1997 tour, there was nary a peep from ABC in the album front for eleven years. Since I felt that Fry was now at the top of his form, this was disheartening, to say the least. 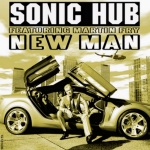 In 2006 the ABC/Martin Fry website mentioned a new song that Fry was singing on.  Sonic Hub had an album called “Eye of the Storm” and Fry was their collaborator on the cut “New Man.” Sonic hub was a synthetic dance music conglomeration that Ricky Wilde [Kim’s brother] had started and they were moving in an Apollo 440 direction. “New Man” was cheekily based on Gary Numan’s “Cars” and featured one of Fry’s most robust vocal performances ever. The power and control he exhibits on this track puts him clearly in Tom Jones territory. This was one of the first downloads I ever bought since there was no physical release of this track at the time. It’s subsequently been released as a remix EP on CD but I stuck with the vocal mix since Fry’s full-bodied performance was the reason why I liked this track so much.

In 2007, word began to filter out on a new ABC album that was in the works. That was about time! It had seemed an eternity since the fantastic “Skyscraping” had been released. Lowndes and Gregory had moved on, naturally, and this album saw him reunited with original ABC drummer David Palmer and a new partner, Chuck Kentis. I had hoped that it would be a worthy companion to “Skyscraping” and it certainly was. The overall caliber of the material is almost as good, which is saying a lot, and overall it shows admirable consistency on Fry’s part to have waited a decade on and produced an album this good.

The biggest difference between this album and the prior one is that it reflects Fry’s formative Roxy/Bowie influences much less that “Skyscraping” did. Better yet, it moves in some new directions that are most welcome for an artist who has been working for almost 30 years. I have to admit, the opening cut “Sixteen Seconds To Choose” set the bar exceptionally high. The ferociously rocking cut sounded like a track that could have rested comfortably on “Beauty Stab” as Fry unleashed snarling fury at “prestige, power, and money, money, money!” One salient fact in its favor is that this is the sort of song that Fry was reaching for in 1983 but not necessarily achieving. Better yet, the horn section ends up giving this track a sneering swagger, not unlike some Jimmy Miller period Stones songs. After such an audacious opener, the senses are braced for anything.

What follows, is the first single; a sprightly confection with a Philly soul feel to the strings although the use of pizzicato strings as well in the arrangement is probably not something that would have occurred to Gamble and Huff. Fry’s lyrics are a delight here and the fact that the track is 180 degrees apart from the opener sets the listener up for pretty much anything. “Ride, ” the next cut is a pulsating ode to the pleasures of the open road, and a real surprise from the pen of Fry.

One of Fry’s earliest influences crops up on the excellent “Life Shapes You.” When they were starting out, ABC were very enamored of the cinematic John Barry sound that he achieved both on his James Bond soundtracks as well as his productions for the likes of Adam Faith. “Lexicon” certainly had nods in Barry’s direction what with the lush and ornate arrangements by the band and Trevor Horn’s Theam. The cut sounds like a fantastic Bond theme; the best such song I’ve heard since Spandau Ballet’s “Gold.” But it’s the middle eight that goes full tilt into Barry territory with an awesome blend of treated bass and strings.

The percolating “Way Back When” is a very unique song, not really like anything Fry [or anyone else] had penned earlier. In it, Fry chides an unnamed female who’s present through the historic periods of his life who sides with conservative, regressive thinkers and forces; castigating those who are moving forward and progressing to the new. As the song moves from Elvis to rave, Fry curtly dismisses her and her brethren.

The only weak spot in this album is “Validation,” which sports uncharacteristically maladroit wordplay from Fry’s usually dependable pen. It’s a piano ballad with a stilted feel that marks it as B-side material. It’s certainly not up to the standard of the rest of the album. Fortunately, the closing tracks are much improved. “Fugitives” maps out new territory late in the game with its gritty wah-wah funk feel suitable for a Curtis Mayfield soundtrack. The closer, “Minus Love” also deals in wah-wah, but this is worlds apart from the preceding tune. This is a glittery disco-ball of a tune featuring lyrics that sound as if they were left over from the euphoric yet reflective “Up” period as Fry outlines what worth a man can have without love.

Overall, the album doesn’t quite scale the peaks of the preceding one, but as it unfolds, track by track, it’s strengths cannot be denied. The breadth of the material is admirably wide and if the opening pair don’t confound the listener, a good time is assured for all. Fry sounds confident and keeps pushing the vocal envelope and growing in ways we’ve not heard him before. The best thing about this album is that it proves that the plateau reached on “Skyscraping” was not a fluke. The only downside is that there was a interminable eleven year gulf between them!

Fortunately, the ABC website has been dramatically refreshed this summer and reader Jeremy Kennedy indicated way back in the comments of chapter one of this [seemingly endless] Rock GPA that Fry has signed with EMI [again*] and is preparing new material a scant three years later! Hopefully, Fry can juggle the lucrative live performances with work that continues to build his legacy. His chops certainly seem to be honed and seasoned by a life in the game with all manner of fortunes delivered to him by the wheel. ABC fascinate me since they willfully moved at a contrary angle from their debut album, which is rightly regarded as one of the best of all time. Weaker individuals would have milked that cow until it was giving powder, but it speaks volumes of Fry’s [and Mark White’s] strength of character that they took large artistic chances with their careers that had serious financial repercussions. It’s significant that they did this on their first three albums, when most bands would be settling in a predictable groove. Sure, they lost chunks of their audience with each twist and turn. They even lost me when they embraced house music trends, but Fry’s innate talent and intelligence marks him as a man worth following since his path is guaranteed to be worthwhile and illuminating.

* Who else is left to sign with, at this point?