Posted on August 5, 2011 by postpunkmonk

I remember vividly when I first heard ABC. Again, I was listening to WPRK-FM a lot back in the summer of ’82. They were moving from the West Coast Hardcore trend of late ’81 to the UK funk trend of the same period; about 6 months behind the UK of course! Given the choice, I’d much prefer funk to hardcore. No contest. Anyway, WPRK started playing an import single of “Poison Arrow” as if it were a top ten song. It wasn’t quite that facile. If you can remember the first time you contemporaneously heard “Poison Arrow” you’ll probably agree that it didn’t just sound like top ten material. It seemed cosmically impossible that this was merely a record and not a thunderbolt issued from atop Mount Olympus by Zeus himself! Surely, it would conquer the number one position in every country of its issue?

This was the zenith of New Pop, that Post-Punk period identified early on by Paul Morley as having the smarts of Post-Punk wedded with an eagerness to use the system from within to achieve pop bliss without regrets. Singer Martin Fry had corralled up the promising Sheffield synthesizer band Vice Versa while interviewing them for his fanzine, Modern Drugs. Fry convinced them that his songs coupled with a change of direction could be just the ticket. By 1981, Funk was becoming the trend-du-jour of British pop cognoscenti and synthpop would no longer be the cutting edge. The band cut a debut single as produced by Steve Brown [the Elton John producer, not the member of Tuxedomoon] that cracked the UK top twenty. But Fry was driven in his perfection. The brash funk number had an innate power that suggested more than it delivered. He needed a master’s hand to guide them.

Then he had heard and liked the trio of singles that Trevor Horn, known then primarily as one half of The Buggles, had produced for the prefab duo Dollar. These creamy studio confections sounded like a million dollars. Pop heads were swooning in spite of the basic indigestibility of the group. Horn for his part recognized talent and offered Fry a Faustian bargain; he would produce the band but it had to be done his way. Fry acquiesced and the band retreated to Horn’s studio for the painstaking process of taking Fry’s not insubstantial portfolio of songs and crafting mountains out of them. The resulting album made ABC worldwide stars and livened up the charts all over the world for at least 18 months.

ABC then continued quixotically on a varied path that would see them confound their many fans expecting more of the same at various times in their long, and storied career. Band members would be shed at an alarming rate; leaving Fry with a single consistent sideman in Mark White, with whom he would record six of the eight ABC studio albums. At one point, after Fry and White called it a day, it seemed that ABC had been put out to pasture, but Fry emerged in 1997 with a new album, co-written with the members of the Sheffield band Honeyroot [Keith Lowndes and Heaven 17’s Glenn Gregory] that showed that there was still plenty of power under the newly retooled ABC hood. Let’s take a look at the macro level view of ABC’s Rock GPA®: 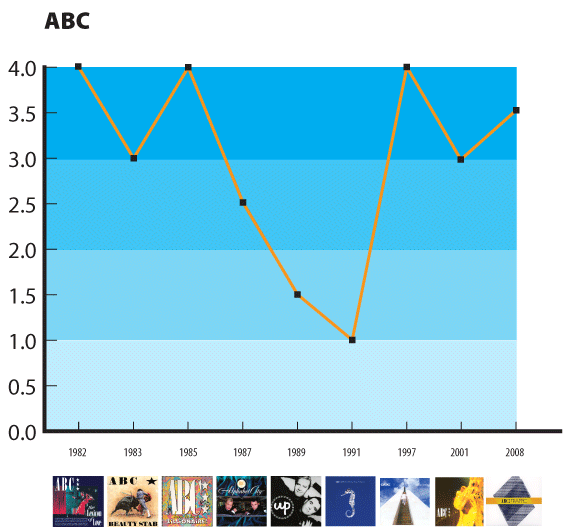 Next: We examine the albums beginning with that first one…