Fiat Lux: Walking In The Shadow of Bill Nelson

I first heard about Fiat Lux when I purchased a Bill Nelson 7″ boxed set in 1983 called “Permanent Flame.” Inside was a discography of all releases up to that time on Nelson’s own Cocteau Records label. Included were Fiat Lux, whom Nelson had produced a debut single for the previous year. Nelson’s connection to the band was strong in that his younger sax-playing brother Ian was a member of said combo. Mental notes were made and almost twenty years had passed until I actually saw Fiat Lux records for purchase. It was when I was spending a pleasant Saturday afternoon at Rock & Roll Heaven in Orlando, near the end of my time there, that I came across two records by Fiat Lux for sale. I picked them up some time in 1999. A dozen years later I finally made the leap to actually playing them! 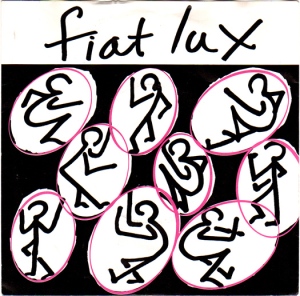 Well, the cover is flat out dreadful, unless you have a fetish for Sharpies®. Fortunately, the record itself is whole realms more wonderful, making the cover the only sticking point. Given that Nelson produced this record, his touches are all over it. It was recorded in his studio. With his instruments. It sounds like he’s playing them. If that’s not him on the e-bow, I’ll eat my metaphoric hat! Vocalist Steve Wright sounds exactly like Nelson, if Nelson could sing as well as he played guitar! In other words, if you are a fan of the post-punk technopop that Bill Nelson busied himself with ca. 1979-1985, you owe itself to seek this record out post-haste!

The A-side is a song of “she done me wrong” woes that excels through an innate dignity that positively emits from the proceedings like rays of sunlight. Though the lyrics would seem to be concerned with the licking of spiritual wounds, the music won’t have any of that moping. Musically, this is a statement of placid, almost lofty grandeur. The B-side is less memorable but as a debut single, this is impeccably sterling stuff. Again, if you are a fan of Bill Nelson, this record is a must! 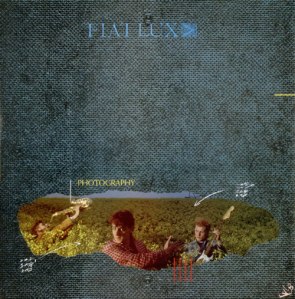 The Cocteau single raised the band’s profile enough to get an offer from Polydor.  The band eventually released five singles but the album was tabled. It was a kinder, gentler time then. These days if the first single stiffed, that would be pretty much all she wrote. That said, “Photography” is a more evasive number that lacks the stateliness so evident in “Feels Like Winter Again.” It’s a philosophical rumination on how the singer’s life is abstracted into two dimensional photographs; hardly typical pop fodder. The Hugh Jones production takes the band further away from Nelson’s shadow to give them something of an identity of their own.

Whoever listed “Aqua Vitae” as the B-side for this single at Polydor needs to have their ears boxed! This is a born A-side with a dynamic dance-rock production just begging to be heard in clubs! Here the band cross the Bill Nelson line of stiffness in the sand and dare to get funky! David Crickmore was responsible for bass, guitars, keys and percussion, and apart from Nelson’s sax and touchings of keys and percussion, seems to have been the band.

Hearing these has me definitely wanting to have it all! Unfortunately, for Fiat Lux, that means only three more singles. There are 12″ variations of all five Polydor singles and it behooves the collector to have both; not just for 7″ versions either. This band excelled in just the sort of synthpop touched with enough conventional instrumentation to catch my ears in a bigger way than either guitar or pure synth music alone can manage. I am loving these first two 7″ singles and need to hear the whole story.

4 Responses to Fiat Lux: Walking In The Shadow of Bill Nelson