It’s been quite a while since the last Song of the Day. Well, lately the songs that stick in my head are tunes by groups I’ve already written extensively about. Lately that was The Cramps and especially OMD. All last week it was “RFWK” from the new OMD album. It’s always nice to have rotating favorites from a great new album. I love it when I am listening to an album compulsively and my favorite changes constantly. It’s a great problem to have, but I’ll bet you’re sick of me writing about OMD. Well, today you get a break.

For the last several days the song that’s been stuck in my head has been an early single from Real Life, the Australian synth rock band who had an MTV hit with the excellent “Send Me An Angel” back in ’83 when that sort of thing was flying high. I had their debut album, “Heartland” and enjoyed it a lot, but the version that I am obsessed with today is not the album version. 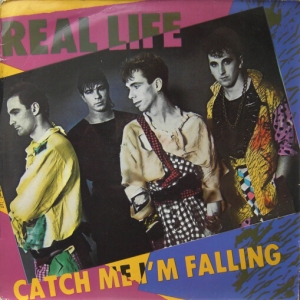 I first heard the remix of this track when the video was [briefly] shown a few times on MTV. That channel played “Send Me An Angel” a lot, but barely sniffed at the follow up. I liked that the single had been extensively remixed for 7″ so I bought a copy of the US 7″ to supplement my copy of their album. I didn’t hear the extended remix until fairly recently, when I bought one of the many Real Life compilation CDs [more on this topic later]. I liked it and was happy to see it was on the CD I bought, but it didn’t catch with me like wildfire until I chanced to play that CD last week for about the second time since I had gotten the disc, and by then, it managed to get a hold on me that wouldn’t let go.

Real Life were a synth heavy Oz band that was aiming for the Ultravox-Simple Minds-Icehouse spectrum of music; just my sort of meat. Other bands down under besides Icehouse they could be effectively grouped with would include Pseudo Echo, whose debut album “Autumnal Park” offered far more persuasive merits than their sophomore album, which had their hit [non-lp in Oz] cover of “Funky Town” bolted on to the US release. Real Life showed what they were thinking of by getting Steve Hillage to produce their debut album. Hillage had previously done the honors on Simple Minds’ great “Sons + Fascination/Sister Feelings Call” albums, which gave the Minds their first hit anywhere when “Love Song” went top ten in Australia in 1981.

This version of “Catch Me I’m Falling” is a textbook example of a great old school extended remix. The intro starts out with the vocoded backing vocals exclusive to the single remix version up front over a skeletal beat as the elements of the tune build up over the first 90 seconds of the song. Lacking the intensity of “Send Me An Angel,” the tone on this single is lighter and poppier than much of the band’s first album. It instead offers a sweet ebullience that recalls A Flock Of Seagulls at their poppy best [think “Space Age Love Song”]. In fact the great guitar playing [by vocalist David Sperry] sounds very similar in style and tone to that of AFOS’ underrated Paul Reynolds. The backing vocals by the band are airy and harmonious and the remix pushes them right up front to make this track the equivalent of a high calorie dessert you just can’t say no to. It’s a wholesome reminder of the early days of remixed 12″ single. More on Real Life, later.