You Sometimes Can Judge A Record By Its Cover – Virgin Prunes

I was always collecting Visage records. I liked the New Romantic supergroup formed by members of Magazine, The Rich Kids and Ultravox and fronted by scene-meister Steve Strange. As a synth-hound I found a lot to love in those records, in spite of Strange’s shortcomings as a vocalist. The musicianship was of a very high caliber with John McGeoch, Dave Formula, Barry Admason, Billy Currie, Rusty Egan and Midge Ure driving the boat. That they were happy to form a dance band shows they weren’t as pretentious as some would have maintained. I say if you’re going to have a dance band, at least make it a damned good one! I was always scouring the bins for something that I might have missed over the years.

It was in Fantasyland records in Atlanta, that the proximity of the Irish band The Virgin Prunes records in the “V” bins pushed me over the edge after one too many sightings of their discs while looking for Visage records. I ended up buying several records by The Prunes that day because of their covers. What does that mean, exactly? Pictures will work better than words. First, here’s a typical Visage 12″ single, for their 1982 track “Night Train.” 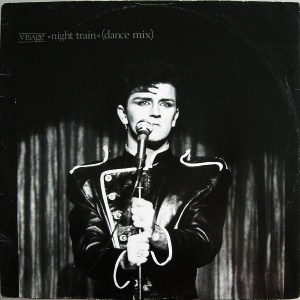 You have to admit, there’s a strong resemblance between the androgynous dandies Steve Strange of Visage and Gavin Friday, the nominal lead vocalist for The Virgin Prunes. Perhaps the music would be in some way comparable. Not just anyone adopts such a foppish image without bringing something to the plate. After pawing through the “V” bins and seeing the Prunes records for years, something snapped and I thought maybe I should see if The Virgin Prunes are worth listening to, since I sure never heard the music anywhere. On the plus side, the Touch + Go 12″ers I bought were produced by Soft Cell’s Dave Ball. I bought another record that was a UK import from 1982 on the Rough Trade label. “The Faculties Of A Broken Heart” was produced by Wire’s Colin Newman! I listened to this record first.

The Virgin Prunes: The Faculties of A Broken Heart UK 12″

Egads! What this record was was not a slick, synth dance record, but instead an edgy as hell postpunk record! Synths were used, but they had a sickly, discordant sound like geese being electrocuted. It was equally hooky and off-putting! I was richly rewarded beyond my wildest dreams for taking a chance on this band! I quickly snatched up their 1982 album “…If I Die, I Die” soon afterward in the dollar bin at Vinyl Fever in Tampa. I also bought the second solo album by Gavin Friday, “Adam N’ Eve” and found it to be a much more melodious and sophisticated program of cabaret pop. He was obviously moving in a Scott Walker direction. In fact, Walker himself tapped Friday to sing at the concert he staged for his one-off Drifting and Tilting concert where the challenging compositions from those two albums were sung by anyone but Walker.

Thinking about Friday reminds me of one of my least likely concerts ever attended in Orlando, Florida was Mr. Friday playing the Sapphire Supper Club one night in 1996/7 behind his spectacular “Shag Tobacco” album. My wife and I were spellbound in the presence of Friday’s stagecraft. The intimate club was treated to a performance that could have shown Mr. Bowie a thing or two about presentation. It was one of my most treasured concert experiences ever. Sadly, Friday has not released an album since 1995’s “Shag Tobacco” but scuttlebutt has it that his new opus is poised for release soon.

If I had to make comparisons, I’d say that Friday is in some ways comparable to Billy MacKenzie of Associates. His music has a similar range from the extremes of discordant cacophony to heart wrenching beauty. This is not to say that vocally they’re similar. Friday is not blessed with the insane range that MacKenzie had, but his artistic temperament is certainly congruent. And to think that I first bought some of his records because they looked like Visage records! Fortunately, I got much more than I bargained for in return.