Sometimes a group is formed and only a single 45 is left to prove that it ever happened. This is about one of those times. I came across the Six Sed Red 12″ of “Shake It Right” sometime in the late 80s/early 90s. I’m not certain exactly when. I’d never heard of it and the internet was still a gleam in some general’s eye. It was in the bins maybe at Murmur Records, as I can almost recall. I was browsing the bins and the unknown cover made me investigate a bit further. I flipped the record over and found that it was a record that featured Cindy Ecstasy, famed for her [great] backing vocals on Soft Cell’s early, classic material. So buying it was a no-brainer. 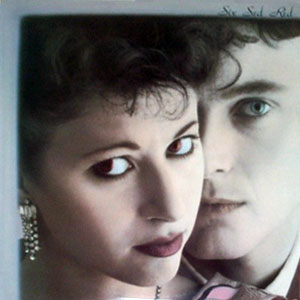 When I got the record home I found that it was a triple threat of New Wave goodness, far beyond the scope of my initial once-over. The gent on the cover with Cindy turned out to be Rick Holliday, of another group [like Soft Cell] who were signed to Some-Bizzare records; B-Movie. I’d liked them since hearing their track “Remembrance Day,” which I first heard on a Flexipop flexidisc [also featuring an unreleased Soft Cell track “Metro Mr. X”] back in 1981. The icing on the cake was the fact that the B-side was remixed by [be still my beating heart] Cabaret Voltaire and featured extra bass courtesy of Stephen Mallinder.

The whole enterprise resembles that of another decadent female/male synth duo, Vicious Pink Phenomena, who also have Soft Cell backing vocal ties, as it transpires.  The A side is fizzy electrodisco with a hint chiaroscuro while the B-side touches on the heavy industrial funk style that Cab Volt were exploring at the time. It seeks to find the trance in the machine. After this, there was naught from Ms. Ecstasy. This single, along with her Soft Cell appearances [“Torch,” “Insecure Me” and the Non-Stop Ecstatic Dancing version of “Memorabilia”] and backing vocals to a Bananarama track [“Dream Baby”] are the extent of her discography that I can find. Rick Holliday’s CV pretty much ends following this single, as the bulk of his credits are from the B-Movie releases he made prior to this single. A smattering of programming credits are all he had following this record.