Song of the Day: Robert Fripp – Under Heavy Manners

After yesterday’s excursion into Talking Heads territory, what song would get stuck in my head today but “Under Heavy Manners” by Robert Fripp from his “God Save The Queen/Under Heavy Manners” album of 1980. Back then, Robert Fripp was finishing his “Drive To 1981” following three years out of the music business from 1974-1977. In 1977 he began playing on other people’s records [Bowie, Blondie, Talking Heads] and in 1979 he released his first, brilliant, solo album “Exposure.” 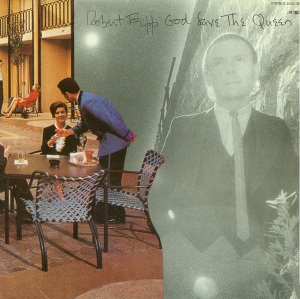 Robert Fripp: God Save the Queen/Under Heavy Manners US LP

The following year he released “God Save The Queen/Under Heavy Manners,” his first album entirely of “Frippertronics,” a system where he used two Revox reel-to-reel recorders in tandem to build up a densely layered web of guitar over which he improvised solos. The result is an incredible sound that’s easily done with digital delays today – but can you solo as inventively as Fripp? Didn’t think so.

The “Under Heavy Manners” side of the album was Fripp’s investigation of what he called “discotronics;” using the Frippertronic system to make disco music, though he admitted in the liner notes that such a term had a very short shelf life by that time. The two tracks on this side of the album had a live rhythm section playing along with the Frippertronic tape loops that Fripp had improvised earlier in performance. Busta “Cherry” Jones [bass] and Paul Duskin [drums] were from the New Wave band The Escalators. Jones had established his cred by previously working with Eno on his seminal “Here Come The Warm Jets” album, but there was another guest artist on the title track, one Absalam-el-Habib, better known to those not in Sire’s law department as David Byrne.

Since Fripp had added zest to “I Zimbra” from 1979’s “Fear Of Music,” Byrne returned the favor even though it violated his contract with Sire, hence the nom-du-disque. “Under Heavy Manners” is a hypnotic track with Byrne in his classic nervous-tic-freakout vocal mode reciting Fripp’s multi-syllabic lyrics over the insistent beat. The lyrics consist of single words concerning politics and religion all ending with the suffix “ism.” After five minutes of tension building the listener hears Robert Fripp’s voice commanding “stop!,” after which the song comes to an abrupt halt. David Bryne then sings “I am resplendent in divergence” three times after which Fripp proclaims “continue.” The next track, “The Zero of the Signified” then begins cold.

This track was a real treat to hear back in the day and is recommended strongly for all fans of classic Talking Heads, before it all went tragically wrong. This track as released has never made it to CD. It was remixed in 1983 for inclusion on Fripp’s ’85 releases, the “Network” EP and the mashup CD “God Save The King/League Of Gentlemen.” The latter contains two tracks from “God Save The Queen/Under Heavy Manners” and seven from Fripp’s 1981 “League Of Gentlemen” album – all remixed for your completists’ displeasure. So you know what that means – one day I’ll be needing to remaster those classic Fripp albums in their full, initial mix, analog glory.

5 Responses to Song of the Day: Robert Fripp – Under Heavy Manners