This week I did something that I don’t remember ever doing, but now that it’s done, I have a richer appreciation of the work involved. Talking Heads had worked with producer Brian Eno from the point of their second album, “More Songs About Buildings And Food” in 1978 through to their 1980 opus “Remain In Light.” During that time, the role of producer blurred for Eno as he was contributing more to the final product, much to the dismay of Heads Jerry Harrison, Tina Weymouth and Chris Frantz. Eno was interested in using the band as his petri dish and by the time of “Remain In Light,” he was insisting that his name be printed along with the band’s on the final product.

Needless to say, this nearly drove the band apart, and they split for several years where it was not guaranteed that they would ever reform again and record. When they did, in 1983, it was clear that something was lost and the music they went on to record after their first four albums gave diminishing returns as the band moved their focus from “art music” and experimental funk to what can be charitably termed “condescending proto-Americana.” The intensity of their funk period meant that the band reached a plateau that made their other work pale in comparison for me. But it didn’t happen overnight.

The second album they released with Eno producing in 1979 was the excellent “Fear Of Music.” It ran the gamut of “new wave” styles but as is often the case when albums are recorded, there was a single track that pointed the way to the subsequent album. “I Zimbra” was the opening track on “Fear of Music” and it offered a trance-disco/Afro fusion piece with an insistent Robert Fripp guitar lead and chanted vocals of “synthetic words” taken from a poem by Dadaist Hugo Ball. The cut sounded like funk, superficially, but when examined closely, was something else entirely – that did not make intellectual sense. This came to inform the group [and Eno’s] next move.

The first of the linked albums was recorded by Eno and Bryne with a shortlist of collaborators as a dry run for what would become “Remain In Light.” The intention was that it would be released prior to the Talking Heads album, but ultimately it got a release several months later following the group’s album. When it is listened to in the sequence it was intended to be heard, it reveals the fascinating roadmap that culminated in “Remain In Light.”

“My Life In The Bush Of Ghosts” is feted for being the first album with “found vocal” but this overlooks the fact that Holger Czukay got there first in 1979 with his “Movies” album. But outside of Can fans, it is probably true that “My Life In The Bush Of Ghosts” was the first album of this sort that substantial numbers of people heard. Sorry Holger!

The back cover details to the best of ability, the source for each of the human voices on the album. Some are from other records; many are recorded from the radio. Eno found that talk show and religious broadcasters had the most animated voices available. Elsewhere, announceritis meant that too many of the voices on the radio were too smooth and professional to be of artistic interest. 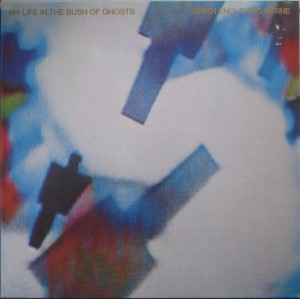 Brian Eno/David Byrne: My Life In The Bush Of Ghosts US LP

The musicians built up polyrhythmic funk tracks, similar to what Fela or even Funkadelic were doing at the time, then it juxtaposed vocals over the music bed with an ear for overall feel, rather than a specificity of word and song. It created frissons of tension by collocating very physical, African-based sounds with whitebread commentators as on “America Is Waiting” or “Mea Culpa.” Then it released that tension with a fiery sermon by an African-American preacher as on “Help Me Somebody,” which ended up being not too different from a James Brown track. The seesaw of dissonance and harmony continues throughout the set as Eno and Bryne explored what they wanted the next Talking Heads album to sound like, if not be.

The next step was the recording of the Talking Heads album. The band recorded either thick grooves and textures or drones with expression vocals put on top. It remained until after the recording for singer David Byrne to coalesce the vocal sounds into words, and in that respect, the end result follows the roadmap of “My Life In The Bush Of Ghosts” very closely.

The single “Once In A Lifetime” has the same juxtaposition of African textures with white, American vocals as on “The Jezebel Spirit” from “My Life In The Bush Of Ghosts.” The lyrics of “Once In A Lifetime” even revisit the same evangelistic subject matter. Elsewhere, the closing drone of “The Overload” echoes the closing drone of “Mountain Of Needles” from “My Life In The Bush Of Ghosts.” When heard in sequence the albums echo an inform one another in ways that were not as directly apparent when heard in their sequence of release. But there is one more album that finishes this trilogy of art-funk.

After the pressure cooker of “Remain In Light” split Talking Heads apart, keyboardist Jerry Harrison made his first solo album, featuring many of the musicians who had fleshed out the sound of Talking Heads to achieve the thickness of vibe they needed on “Remain In Light.” This included Nona Hendryx, Bernie Worrell and Adrian Belew. In many ways it is a continuation of the thick, afro-centric sound of “Remain In Light;” looser on some tracks, on others even eclipsing the fervid intensity of the earlier album!

Jerry Harrison: The Red + The Black US LP

Harrison’s vocals and lyrics are not a million miles removed from the approach that was taken on “Remain In Light.” He favors a voiceover approach on tracks like “Magic Hymie” which resemble motivational speaker tapes overlaid on the thick grooves the band is still very interested in exploring, with or without David Byrne. “Magic Hymie” is co-written with Hendryx and Worrell and it is measurably funkier than even the rest of the program.

The album reaches a fevered peak on “Worlds In Collision.” It begins with a foreboding drone overlaid on a chittering rhythm box. It could be a swarm of flies; it could be a phalanx of bombers overhead. It certainly doesn’t bode well. When the bass enters the thick mix the bassline is not a million miles away from that on the 12″ remix of “Sensoria” by Cabaret Voltaire, released three years later. Eventually, Hitler’s Nuremberg rallies are overlaid on the writhing mix as Harrison’s agitated vocals reach a breaking point. The track segues into the healing ambience of “The Red Nights” and it’s as neat a feat of sequencing as I’ve ever heard; matching achievements on Eno’s own “Here Come The Warm Jets” or on Yello’s “Solid Pleasure.” When it’s over, you know you’ve just listened to the Talking Heads album that should have followed “Remain In Light” and did, in all but name.

Following this busy year, the artists involved moved on to different territories and never came to the same nexus of Afro-funk and art rock as evidenced on these three albums. Bryne was content to adopt other world music forms, primarily Latin music to my utter indifference. Eno went on to produce U2 [snore]. Harrison made more rock-oriented records with his band Casual Gods which, as interesting as they are, fail to reach the heights of “The Red And The Black.” Finally, Chris Frantz and Tina Weymouth formed their successful cartoon funk project Tom Tom Club and laughed all the way to the bank with the best selling records that were as light as air compared to this heavy trio.