Posted on September 29, 2010 by postpunkmonk

I grew up listening to Top 40 radio on the AM band as a child. I was given a transistor radio and discovered Los Angeles’ KHJ [“Boss Radio”] sometime during the summer of 1970 while I was in 2nd grade and was amazed to discover that all of this music was out there for the taking. I had recently been given this RCA record player and a stack of 45s dating from the origins of the 7″ single through the mid 60s. The record player only played 45s and had tubes in it, so the sound was “warm!” I only had about 40 singles to listen to. The radio offered a ceaseless parade of music to hear, and I was hooked. 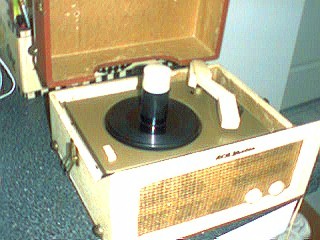 KHJ played a pretty wide variety of hit music of all stripes. I got my early exposure to funk in Los Angeles, which is good, because when my family moved to Orlando, Florida in the summer of 1972, all that went away. I was pining for KHJ but practically, it was not to be. I found Orlando’s closest analog, WLOF-95 AM and moved on. I couldn’t help but notice that Orlando Top 40 was far more conservative in their playlists. Much less music “of color.” Not much soul or funk to speak of unless it was really high in the charts. I discovered Billboard’s American Top 40 program and became a regular listener. By this means I could hear material that was not played regularly in my market. Each of these Three Seminal Singles falls into this category. These songs made dramatically larger impact on me for the apparent scarcity of them on the Orlando airwaves. 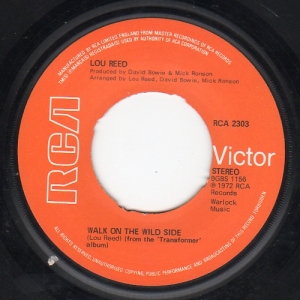 In 1972 the first of these singles was released. Lou Reed’s “Walk On The Wild Side” was one of the most atmospheric I can remember hearing as a child. And the atmosphere was tantalizingly adult. At the age of nine, I can’t even have begun to have understood the content of the song but I was aware that it was something that probably related to the concerns of grownups. I would understand the lyrics later.

What I immediately understood was the vibe! Herbie Flowers’ eloquent bass playing! The Ronson-Bowie production. The warmth of the string section contrasting with the coolly observational lyrics. I loved the way that the backing vocalists rose in the mix [and got “drier”] before the masterful Ronnie Ross saxophone solo that takes it home. Hearing this song on the radio felt like something special was happening that by all rights probably shouldn’t be allowed to happen. Hearing this song was like getting away with something.

In the later years of the 70s, I might typically hear this song on occasion while listening to the radio after 10-11 p.m. as DJs maybe had some additional leeway to play it then. But in all actuality, the late night vibe of the song is ill-suited to the daylight hours and the decision to play it in “safe harbor” served the song exceptionally well.

I don’t actually own the 7″ of this song. I have the swell late 90s remaster of the “Transformer” album on CD to assuage my need to near the number. But I must take the steps to get this in my collection in 7″ format because this was the earliest of my Three Seminal Singles. Songs that opened my hears to a larger world and were instrumental in making me the person I eventually became.