The Strange, New World of 12″ Singles – A Look Back At A Loss of Innocence

As I collected records, I discovered all of the rules as I went along. Having no siblings, I didn’t have anyone to point me in any particular direction. Growing up in the seventies, there were either albums or singles to buy, and singles were 7″ slabs of vinyl with two songs on them. Period. By the time I got into high school and was being tempted by New Wave music, the better record stores in town had import sections, where this new style was available in its pure and uncut form. Usually along with the import albums in JEM polybags, selling for $10.00 a pop (as opposed to the $6.98 US LP list price at the time – 1979), there were also smaller boxes of 7″ import singles.

These delights gave you two songs that were not widely available in America for the usual price of $3.00 apiece. If you had ten bucks to spend, it was possible to buy a domestic album and taste the excitement of an import 7″ single as well. It was also a cool way to hear songs by your favorites in some cases many months before said tunes ever got a domestic release, if ever. And even if it did show up on their US album, usually the B-Side was a tune that only appeared on the single; giving your $3.00 investment value later on down the road if you bought the album. New Wave was nothing if not a return to pop single values (though viewed through a filter of new attitudes and technology) following a decade of bloated, album length decadence.

I knew of “disco singles” but because I never bought disco records, this was something I was aware of but never encountered. In any case, they were not terribly common in record stores of the time (late 70s), which were all pretty much still hippie-esque, sandalwood-scented, quasi head shops. But in 1980, somewhere in the import bins, I had started seeing 12″ records in polybags that retailed for $5.00 instead of $10.00. I didn’t know exactly what they were at first. They looked like 12″ EPs which had become more common in The States by this time. These were comprised of generally four to six tracks for less than the price of an album. This was seen as an effective way to break many of these new, weird New Wave bands the majors were signing but radio was definitely not playing.

The one that sticks in my mind was the 12″ of “Vienna” by Ultravox. I was a huge fan of this album but the 12″ single from it was in a full LP style sleeve [paperboard + inner sleeve] and had a different cover. 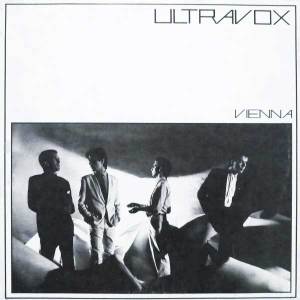 Therefore, I made the rash assumption that perhaps what I was seeing was the UK LP cover design as opposed to the B&W band shot on my US copy. I passed on this strange record, at the time.

Curiously enough, I can’t remember the very first 12″ single that I eventually bought, but it certainly happened in 1981.  By the end of the year I was definitely savvy enough to buy these new format singles. Usually the A-side was extended and at the least there was a single non-LP B-Side. Sometimes two. It didn’t take long for my import 7″ single consumption to pretty much plummet in favor of 12″ singles. I liked the idea of extended A-sides and they very much fed my collector’s gene. By 1982 I generally eschewed 7″ import singles even if they group involved was part of my core collection; OMD, JAPAN, Ultravox, etc. It wasn’t until many years later that I began re-collecting 7″ material from these artists.

So buying import 12″ singles was definitely the way to keep up with my favorite groups. The fidelity of the format was as good as music sounded in the pre-CD era [barring 7.875 i.p.s. reel-to-reel]. Those fat grooves gave much better bass response than even LPs had. As the early eighties lurched forward, the price moved from $5.00 to $6.00. By the time of the post-MTV 2nd British Invasion, the US labels jumped pretty hard on the 12″ single bandwagon. Domestic material proliferated at this time, for the lower price point of $4.98 a pop. This was a nice profit to the labels, which sold 7″ singles for about 60% less.

Sometimes I found that I could wait a little while and get the US version of a 12″ for the lower price point. Sometimes these were otherwise identical to their UK counterparts. Other times, the packaging and material differed, giving the discerning consumer two copies of a single that needed purchasing. The US labels took the lead in remixing with experts like Steve Thompson, Michael Barbiero,  Francois Kevorkian being among the first names that showed up as specifically credited remixers. Early UK mixes were uncredited; presumably the original producer/engineer/tape op was responsible for the remix. But after a few years, the UK followed suit, though the adventurism of the domestic remixes generally handed them a lead of several years over their European counterparts. At least until the mid-to-late eighties.

By 1984, the rules changed again. The sound of Trevor Horn with Frankie Goes To Hollywood ruled the UK charts almost all year. And with only three singles! How did they do this? A history lesson, dear readers. I’d first heard “Relax” when it was featured on MTV’s “London Calling” program and was so smitten with it that I listened to a cassette tape I’d dubbed of the stereo FM feed I’d recorded of the program [in those pre-stereo TV days] all day the following day. I bought the import single of “Relax” as quickly as I could. I distinctly remember the first time I heard the next single, “Two Tribes.”

I was at a concert for Elvis Costello & The Attractions touring behind their sorry “Goodbye Cruel World” album. Fortunately, Nick Lowe was opening, thereby providing some good memories of the evening in terms of live music, but the big event of the night that had all the kids talking was the between set music where the crew were playing what was obviously “Two Tribes,” the much-discussed second FGTH single in its full 12″ glory.

“Mine is the last voice you’ll ever hear. Don’t be alarmed.”

As soon as it hit the shops it was in my hands. The ZTT packaging, as I was accustomed to by now, was as fascinating as the ornate and cinematic “Annihilation” remix of the A-side. Everything about this record was designed to push my buttons from the provocative sleeve images [flirting with Ronald Reagan assassination imagery with the placement of the spindle hole in the dimwit Gipper’s forehead] to the no expense spared production of the record, complete with civil defense narration.

Sated, [or so I thought] I went about my business buying records every weekend for a little while and then, I was in a shop I didn’t usually frequent when I spotted this: 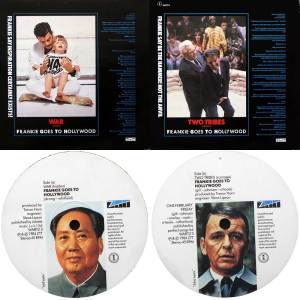 What th’ hell…?!? It looked like “Two Tribes,” only everything about the package had been… remixed. The B-side [a cover of Edwin Starr’s “War”] had been made the A-side and “Two Tribes” was now the B-side of the single. My mind hadn’t twigged to the concept of multiple remixes of the same song, but the packaging was so intriguing, I plunked down my precious money anyway – just to see what was going on here! The record had a second remix of both songs that differed from the original 12ZTAS3 that I had bought earlier. The “Two Tribes” remix in particular had the wonderful middle eight that was not on the first 12″ single.

A line in the sand had been crossed, and ultimately erased. ZTT managed to keep interest in the tune via a plethora of remixes released at regular intervals that saw the song in the UK charts all that summer. There were ultimately four different “Two Tribes” 12″ singles. The two described above, [technically one is a “War” single] and the “Carnage” and “Hibakusha” mixes, as shown below. 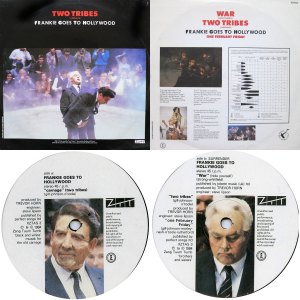 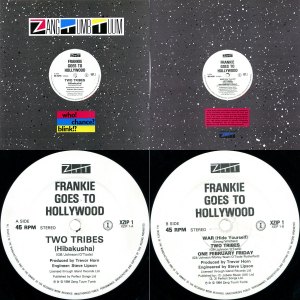 The “Carnage” mix appeared on both XZTAS3 and WARTZ3 and the “Hibakusha” mix in particular was a limited edition of 5000 and is not in my collection, though I have the mix on a CD compilation. I imagine by the time of the fourth remix, even the best minds of ZTT [and we’re talking about Trevor Horn, Paul Morley and the Theam here] couldn’t bring themselves to bash out a fifth remix of the single, which I’ve never tired of hearing in any version, truthfully.

After the summer of 1984 where ZTT let the genie out of the bottle [though they did it magnificently], it would be viewed as a sign of impoverishment to only release a single extended remix of a track. A pair of 12″ singles would be common and by the time that ecstasy fueled the UK’s rave culture in 1987, half a dozen remixes of a track would be as common as dirt. Labels would throw money [not much, I’m guessing] at remixers to lend mystique to singles and would use the spaghetti gun technique to see if they could turn any old dross into a hit via yet another remix.

At a certain point, the styles moved to the point where techno/rave/dj mixes lost me in the early 90s and subsequently, I stopped collecting many artists who were once “core collection” groups cold due to the fact that I no longer enjoyed the remixed singles I used to seek out diligently. If I couldn’t have it all, I would have none of it any more. Farewell: Depeche Mode, Pet Shop Boys, Erasure et. al. But for a good ten years, the remixed 12″ single was a must-have. Ultimately, it was the most attractive way of collecting the output of the many, many artists whom I coveted.

6 Responses to The Strange, New World of 12″ Singles – A Look Back At A Loss of Innocence