Just as a public service to anyone reading this cold without knowing me or my history, there are certain terms that may pop up in this blog from time to time that bear some explanation.

REVO
This is taken from the phrase “Revolt Into Style.” It has nothing to do with sunglasses in my usage. Instead, it began life as a sociological book by jazz/blues singer/scalawag George Melly in 1970. It was name checked nine years later by Bill Nelson on his seminal electro-wave LP “Sound On Sound.” When my wife was searching for a name for her antiques selling business in the 90s (she specialized in mid-century modern) the Nelson/Red Noise song title immediately came to mind.

She stopped that lucrative, but tiring, business in the late 90s. When I set about to the goal of creating my own private “record label” it was very easy to spin off REVO: a leisure division of the Revolt Into Style corporation, into existence. So when I started remastering vinyl and compiling rarities into coherent packages when I first got CDR technology 11(?) years ago, the REVO brand was born. My other website (you know where to find it) catalogs the projects in varying detail. Since that webspace is all used up, I started writing on Blogger and will ultimately re-host the other site when I get around to buying a domain for it (probably never at the rate I’m going).

CORE COLLECTION
At heart I have the “collector’s gene.” The first thing I began collecting were Odd Rods stickers when I was in first grade. 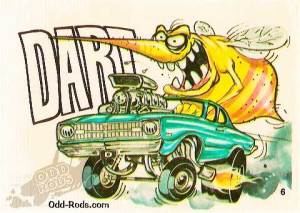 By third grade I finally got my hand on some Wacky Packages (which I had seen and admired from afar since 1967).

These kept me going through elementary school (and beyond). By the time I started to seriously buy records (concurrent with my first stereo in the summer of 1978), I quickly realized that my favorite bands had many records to hear. With my predilection for collecting, I soon discovered that if I liked a band, I wanted to own everything by that group. By the time that I was in high school, I discovered imports and all bets were off. I had a large record collection by the end of high school, but there was not a lot of diversity in it as I tended to buy everything a group I liked put out. When I feel that strongly about a group, then it can be said to be part of my “core collection.”

Core collection records are usually every recorded song and variant released by a band. That means albums, singles with alternate versions/B-Sides, compilations with rare tracks, obscure foreign pressings with material that only appeared in a certain territory; basically every legitimate release by a group that offers something unique and different from the straight cuts on their albums. In some cases, I like the group so much that I throw caution to the wind and buy everything that I see. Period. So there are literally dozens of groups that comprise my “core collections.” The term is a catch-all for any groups that I seek to own every track from.

What groups are in my “core collection?” That’s the grist for hundreds of postings, but if you view my Blogger profile, you’ll see dozens of groups that are at that status in my collection. I’ll add the caveat that certain periods of groups histories fall outside of my collecting interests. I love ABC, but not their house music phase, so the “Up” and “Abracadabra” phases of their career are absent from my home. When I complete a “core collection,” I then plan on making a BSOG® (see below).

BSOG®
This is my acronym for “boxed set of god.” It’s what I do with my free time. I like to compile every track and variant that is not in a group’s straight album canon and master it to a boxed set that spares nothing in its detail. It ties together my deep love of music along with discographical research, curation of my collection, and ultimately my love for graphic design as well, into a potent package. I make the things I would buy if it were possible to make and sell them. But in a world where the music industry is run by lawyers, it’ll never happen. On a personal level, a BSOG® is all about making it happen.

It takes many years of research and purchasing of “masters” before the collection gets in a state that the process can be finally begun. Buying all of the records and discs that I need to compile the project from takes many years and up to hundreds of dollars. On average, it feels like I spend 7-10 years planning various projects, steadily buying releases for multiple projects all the while. Of course, discographical research is concurrent with the actual collection influx, and it’s not uncommon for a project that’s in “lockdown” status to get reopened when new research reveals further recordings not accounted for. After all, the discographical information on the internet is constantly refining. In the last several years, I’ve discovered that Discogs.com is the best resource to start with. I wasted no time in becoming a contributor to that database as well.

While I can remaster the occasional album from vinyl that has never been issued on CD, the main thrust of my efforts are in boxed sets of rarities. These might be as slim as 2 discs or as expansive as 10 discs + DVD or even CD-ROM. Sometimes there are interactive PDFs that are books within their own rights added to the CDs. My Claudia Brücken discographical catalog expounded on the nuts and bolts of my collection of her music to the tune of over 200 high resolution pages. Similar PDFs for Mari Wilson and Voice of the Beehive topped out at roughly half of that.

Lately I’ve had a preference for physically printed booklets of liner notes just because I have the technology. The booklet for my Spandau Ballet “Canon” boxed set was a jewel-box-straining 44 pages; pretty much the physical limit for a booklet that can (almost) fit into a multi-disc jewel box. Since I can print at up to tabloid size, I use multi-fold poster inserts where appropriate.

POST-PUNK
Since I am the Post-Punk Monk, let me qualify how I am using the term. While I’m certainly aware that it’s not uncommon to refer to certain styles of music as post-punk [PiL, Wire, Magazine], to me that gets a little blurry. So I prefer to think of Post-Punk as a historical period rather than a style per se, that began in 1978 and carried on to varying degrees until 1985, or so by which time it pretty much evaporated in the marketplace of ideas. As such it can encompass New Wave [DEVO, Human League 1979, Blondie], Ska [The Specials, The Beat], New Pop [ABC, Altered Images, Human League 1981], New Romantic [Visage, Peter Godwin], Industrial [Cabaret Voltaire 1978, Throbbing Gristle] …you name it. If it was a trend or style that happened in that time frame, it’s pretty much in my crosshairs. Of course, much music that predates this period is of vital importance, and may get mentioned here. It’s hard to imagine the Post-Punk Period without the groundbreaking work of the artists who informed its creation and development. You know who I’m talking about: The Velvet Underground, Roxy Music, David Bowie, Brian Eno et. al. So it may be that we’ll cast the Post-Punk Monk net further afield than the misty days of 1978.